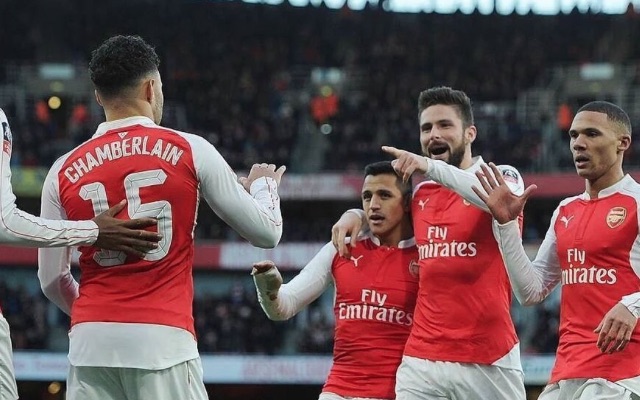 FA Cup monopolisers Arsenal moved into round five on Saturday by beating Arsenal 2-1 at Emirates Stadium.

Goals from Calum Chambers and Alexis Sanchez saw the Gunners, who are aiming to win the trophy for a third straight year, ease past the Championship outfit.

Alexis made his first Arsenal start since November and he was the Man of the Match, according to our friends at All Arsenal.

Made a great save early on to keep out Andre Gray, although didn’t always look 100% assured. He potentially could have done more for the goal we conceded, and could have generally filled his back line with a little more confidence. One moment when he spilled a relatively tame shot was extremely worrying.

This was a difficult one, as his first half super strike obviously played a huge part in the game. He was defensively suspect though, reading the game poorly at times, switching off, and contributing to the Sam Vokes goal we conceded.

His pace was vital with Chambers on the opposite flank, and he matched Andre Gray well at times. He was constantly on offer going forward, but the final ball eluded him.

We were arguably lucky not to concede more than we did, as our defence wasn’t at its best. Koscielny slipped once to allow Gray in, handballed it dangerously in the second half, and really looked a little uncertain at times.

A decent performance for the most part, but he was largely to blame for the Sam Vokes goal.

Understandably looked a little rusty after months on the sidelines, but as usual was seen flying into tackles and charging around the pitch.

Nothing wrong with the Spaniard’s performance. He came on, sat in midfield, and connected defence and attack.

Not bad at all for a debutant, playing in two different positions throughout the match. He started pushed slightly further forward ahead of Coquelin, and played a number of good passes and took a few long shots. He then dropped deeper when the Frenchman was subbed off, and showed his more disciplined side. There were a couple of mistakes, heavy touches, and misplaced passes, but overall a decent performance.

His lack of end product is still a concern, but he was one of the brightest sparks throughout the game. He was constantly driving at the Burnley defence, and supplied the assist for Alexis Sanchez’s goal.

Lively and constantly looking to get on the ball, but the youngster still looks incredibly raw. His off the ball movement could unquestionably do with a little bit of work.

A decent display on the Czech international’s return, and hopefully we’ll be seeing more of him before the end of the season.

A consistent threat, an assist and a goal, and just generally fantastic. He proved the difference maker in the end, even though he was subbed off midway through the second half.

A really disappointing cameo, in which he was caught offside, and then fluffed his lines one-on-one with the keeper.

Some decent hold-up and movement from the Frenchman, who regularly made himself available. His flicks, backheels, and clever passes just weren’t coming off though, and unfortunately, moves often broke down when they reached him.