There could be a potential Barcelona – Real Madrid love rivalry on the cards after Neymar posted a picture of himself with model Kendall Jenner, who has recently been linked to Cristiano Ronaldo.

The Real Madrid megastar has been a long time admirer of Jenner’s and has left his fair share of red love hearts on her Instagram pictures. Meanwhile Neymar has been rumoured to be dating UFC card girl Jhenny Andrade.

However, Jenner has previously revealed that she used to have the hots for Neymar.

“Kendall was totally flattered that he ‘liked’ her photo on Instagram. She, along with all of her sisters, thinks Cristiano is gorgeous,” a source said.

“If he asked her out on a date, she would accept with no hesitation. It would be an experience that’s for sure.”

And it seems that the Brazilian has the jump on Ronaldo as Jenner is in Barcelona to launch Mango’s new Spring 2016 campaign. 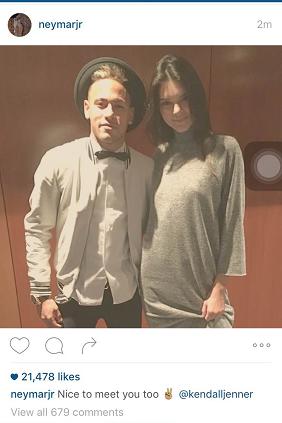 Watch this space, this could get interesting…