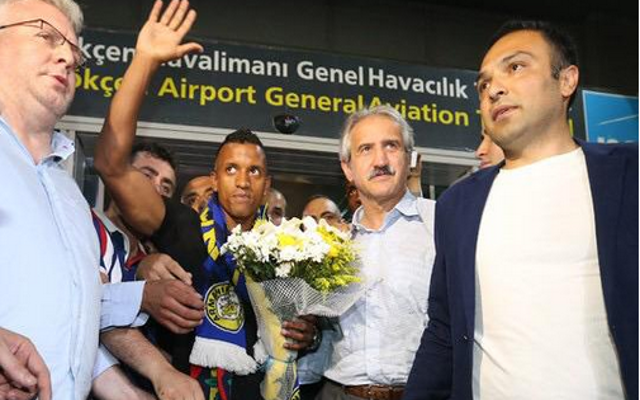 According to reports, Fenerbahce have rejected a €20 million offer from an unnamed Chinese side for the signing of winger Nani.

Club chairman Aziz Yildirim has confirmed that a Chinese Super League side has made a big-money offer for the winger, who only moved to the Istanbul heavyweights at the beginning of the 2015-16 season when he secured a move from Manchester United.

Chinese sides have been among the big spenders and the key influences during the ongoing transfer window, during which the likes of Gervinho, Fredy Guarin and Ramires have all left high-profile European sides to seek their fortunes in the Far East.

Shanghai Shenhua—who signed Guarin—are understood to be keen on another Turkey-based forward, Lukas Podolski, who may be being considered as a backup option for Nani after Fener rejected an eye-watering deal.

“We initially received an offer of €17 million for Nani from a Chinese club. Yesterday they raised their offer to €20 million,” Yildirim began, as per AOL.

“If we were disposed to sell Nani, they would offer €25 million, but we rejected this and told our player that we don’t want to sell him.

“The club offered Nani €10 million per year but he didn’t want to leave either, and told us: ‘I want to win the league title here. If I want to leave we talk again at the end of season’.

“I thank him for his manner.”