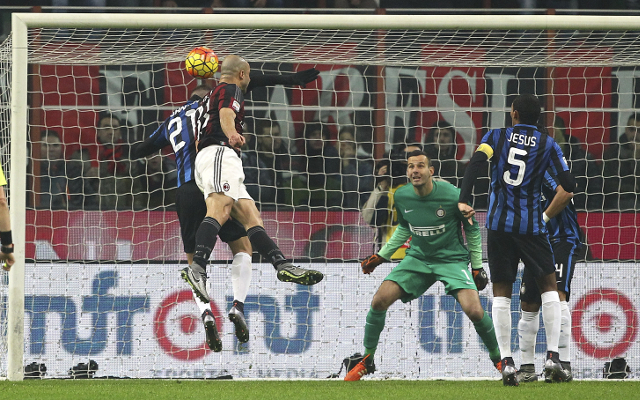 AC Milan went into the half-time interval of Sunday’s Derby della Madonnina with a 1-0 lead after Alex broke the deadlock with this impressive header.

The Nerazzurri had the best chance of the opening stages as new signing Eder sent a wayward header out of danger with the goal seemingly at his mercy.

Both sides continued to push forward in search of the opening goal of the game setting a great tempo in the process, with Milan threatening to gain a foothold as they continued to grow into the encounter.

However, the Rossoneri did look vulnerable on the counter-attack with the likes of Eder and Ivan Perisic causing issues with their pace down the flanks, and coach Sinisa Mihajlovic will certainly be keen to address that heading into the second half.

Nevertheless, the Serbian tactician was handed a huge boost as Alex gave the ‘hosts’ the lead and it could prove to be decisive in a clash that is usually decided by the slenderest of margins.

Roberto Mancini will undoubtedly still believe that his side can turn things around, and the Italian tactician could be tempted into bringing captain Mauro Icardi off the bench.