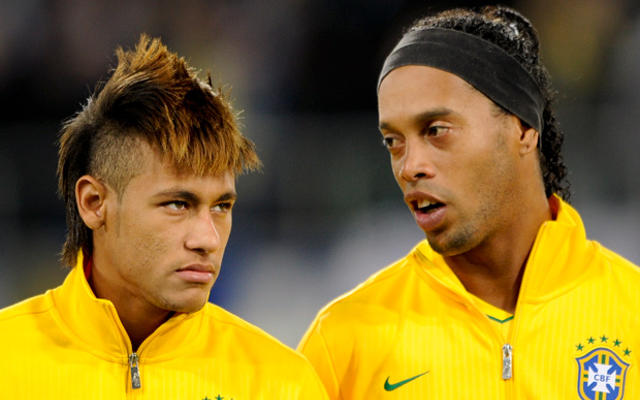 Speaking at the Mundo Deportivo gala on Monday evening, Ronaldinho has made a public transfer prediction on his compatriot and Barcelona superstar Neymar.

The latter, like the Brazil great, is steadily on his way to becoming an idol at the Nou Camp, and currently enjoys a spot as one third of arguably the most celebrated forward lines in the history of the game.

Speaking on Monday to the radio show ‘El Partido de las 12’, quotes as per Goal, Ronaldinho has praised his successor and also backed the forward not to move to Real Madrid.

“Neymar is reaching the top, is making history and his time will come too,” Ronaldinho said, as he compared his compatriot to Cristiano Ronaldo and Lionel Messi.

“I don’t think he will go to Real Madrid,” he continued. “Hopefully, Neymar will be the best in the world, he’s very talented and is at the best club in the world. I think he’ll get there.”

While Neymar has taken great strides at Barca since moving to the club from Santos in 2013, he is yet to match the achievements of his celebrated compatriot.

However, considering that Neymar is still only 23, there’s every chance the younger man will one day eclipse the legendary playmaker.

To date, the former Santos star has won one La Liga title, one Copa del Rey, one Spanish Super Cup, the Champions League, the Uefa Super Cup and the Fifa Club World Cup.

Compare this with Ronaldinho, who won two La Liga titles, two Spanish Super Cups and the Champions League with Barca.

Beyond that, however, Ronnie also lifted the World Cup in 2002 and the Copa America in 1999, not to mention winning a whole clutch of individual honours including two Fifa World Player of the Year awards and the Ballon d’Or in 2005.