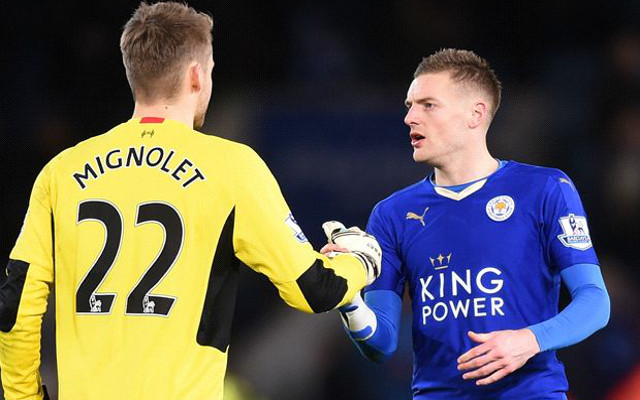 They say a good magician never reveals his secrets, but there’s nothing magical to Jamie Vardy – just raw talent, intelligence and a sharp right foot. After pulling off one of the best goals of the 2015-16 season, the Leicester City scoring machine revealed a secret that other strikers might be able to exploit when facing Liverpool goalkeeper Simon Mignolet.

In an interview following the 2-0 win over Liverpool [per the Metro], Vardy revealed that Mignolet has a tendency to play off the line and was susceptible to shots over the top despite his massive 6’4″ frame.

‘To be honest with you I was looking all game and he was quite far off his line,’ Vardy said.

‘So as soon as Riyad’s played it through and it’s bounced quite high and I’ve got no support, I’ve just took my chance and luckily its gone over the top of him.’

Mignolet has drawn plenty of criticism from Liverpool fans this season, who earned considerable praise from former manager Brendan Rodgers but has given up big goals in big games far too often for fans’ liking.

The Belgian goalkeeper has recorded seven clean sheets this season and has missed less than a handful of Premier League games since joining the team in 2013.