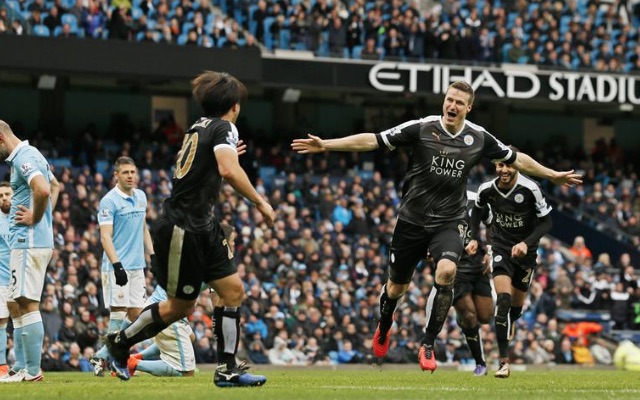 No, you didn’t read that wrong. Leicester City did beat Manchester City 3-1 at the Etihad Stadium.

And the Premier League table makes even more unbelievable reading, with the Foxes now six points clear  of the Citizens at the top, and arguably the new title favourites with 13 games remaining this season.

Riyad Mahrez bagged an outstanding solo effort in between two goals from Robert Huth, who opened the scoring three minutes in and then made sure of a famous victory with this 60th-minute header.

The German defender climbed above his marker Martin Demichelis to power home his second of the game, having previously converted a cross from the brilliant Mahrez smartly past Joe Hart.

Mahrez has 10 assists for the season and got himself on the scoresheet for the 14th time this campaign with a superb individual goal which should give the Foxes further belief in their title tilt.

The Algerian danced through three Man City challenges, left Demichelis behind and then finished smartly at the near post past Hart, who may have been expecting a right-footed curler.

Sergio Aguero scored an 87th-minute reply which proved nothing more than a consolation for the Citizens on what was a desperately disappointing and damaging afternoon for Manuel Pellegrini’s men.