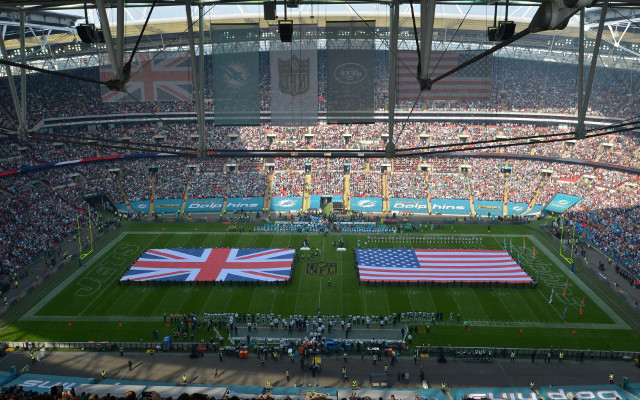 By hook or by crook, the National Football League intends to have a franchise in London in the not-too-distant future, and NFL Commissioner Roger Goodell made it clear this week that getting a team in the city is a “realistic possibility.”

According to ProFootballTalk, Goodell stated that the exponential growth of NFL football in London has made the possibility of expansion much more realistic and intends to work on having even more games played in the city in light of the recent success of the NFL International Series, particularly NFL London.

“Every time we give our U.K. fans, and I think this is true on a global basis, an opportunity to engage with football, the fans want more, and the key to our strategy several years ago was to give them the real thing, regular season games, and I think that’s worked,” Goodell said. “I think fans have appreciated that. Every year I go back to London, I see the fans are more sophisticated. They understand the game more. They’re following it more. We expect a big audience will be in the U.K. watching the Super Bowl on Sunday, Monday morning I think their time. That’s exciting for us. We are considering playing more games in the U.K. It’s a balancing act with our schedule. As you know, we’re playing in two different stadiums this year, so that gives us a little bit more flexibility in how we do that, but I believe the future will see more games in the U.K. As far as a franchise, let’s continue to grow. Let’s continue to see that excitement and enthusiasm, passion and support continue to develop. If it does, I think that’s a realistic possibility.”

The NFL has gained enormous popularity in England over the past few years, with attendance at the three games played at Wembley Stadium setting new attendance marks for several of the teams that played.

There would be numerous obstacles to adding a new team, such as deciding whether to build a stadium from scratch or share one with a Premier League or other London-based sports team.

This past July Tottenham Hotspur agreed to have a minimum of two NFL games per year played during a 10-year partnership at their new stadium in London.

Arsenal chairman Stan Kroenke will feature his newly-relocated Los Angeles Rams in London this coming season and has been one of several NFL owners advocating expansion.

The Jacksonville Jaguars – owned by Fulham FC chairman Shahid Khan – are under contract to play in London for several more years and have been speculated as a possible team to move.

The NFL has not had an expansion since the Houston Texans joined in 2002. The team endured five straight losing seasons at the start of its existence and did not make its first playoff appearance until 2011.