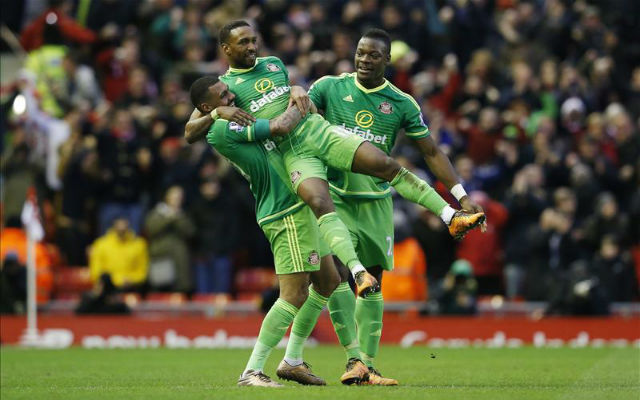 Liverpool and Sunderland drew 2-2 at Anfield this afternoon, as the Black Cats completed an unlikely comeback after trailing 2-0 with ten minutes remaining.

Liverpool dominated the first half possession-wise but couldn’t find a way through. Roberto Firmino eventually broke the deadlock in the 58th minute and Adam Lallana added a second 12 minutes late. Most of the ground emptied in the 77th minute in a protest over ticket prices, meaning they didn’t have to see Adam Johnson and Jermain Defoe score two late goals to grab a point for the visitors.

Liverpool made one change to the side that lost against Leicester in midweek as they introduced Joe Allen for Lucas. Daniel Sturridge was also on the bench, his first involvement with the first team in more than two months. Their biggest absentee, however, was manager Jurgen Klopp – the German was forced to miss the game after coming down with suspected appendicitis.

Sunderland made two changes from their loss to Man City, with Duncan Watmore and Wahbi Khazri replacing Fabio Borini and Jeremain Lens.

The Reds had a disastrous start to the game as Lovren was forced off inside the first ten minutes. The Croat headed straight down the tunnel with a suspect reoccurrence of his hamstring injury and was replaced by Kolo Toure.

The game progressed at a slow pace. Liverpool enjoyed 80 percent possession in the opening twenty minutes, but their only real chance came when full-back Alberto Moreno forced Vito Mannone into a smart stop from a tight angle. The unmarked Firmino was disgusted at the Spaniard’s decision not to square the ball.

Liverpool had another half chance after 30 minutes, but Milner failed to pick out the unmarked Lallana after bursting into the box.

Joe Allen was also forced off with an injury on the stroke of half-time. Jordon Ibe was his replacement.

The teams went into half-time with the score at 0-0. The most exciting sight of the half was Daniel Sturridge warming up on the touchline.

The first chance of the second half came after 53 minutes. Firmino danced past three players and smashed an effort from 30 yards, but it flew just over the bar.

Liverpool finally got their breakthrough in the 58th minute. James Milner swung in a perfect cross from the left flank and Firmino’s accurate header beat Mannone at the far post.

The lead was doubled twelve minutes later. Firmino nicked the ball off Billy Jones and burst into the area, eventually squaring the ball back to give Lallana a simple tap in.

In the 77th minute the mass walkout occurred as planned. Amid chants of “You greedy bastards, enough is enough”, at least half of Anfield headed for the exits.

Sunderland pulled a goal back via an Adam Johnson free-kick in the 82nd minute after the ball snuck inside the post, and the Black Cats snatched an incredible equaliser in the 88th minute.

Jermain Defoe picked up the ball on the edge of the area, twisted Sakho inside out, and buried it past a helpless Simon Mignolet.

The was no time for Liverpool to respond, and the game ended 2-2.

The result leaves Liverpool down in 8th with 35 points and surely ends their top four ambitions. Sunderland stay 19th but move onto 20 points.

Liverpool’s hectic February schedule continues on Tuesday when they travel to West Ham for an FA Cup fourth round replay ahead of a trip to Aston Villa next weekend. Sunderland will welcome Manchester United to the northeast next Saturday.