Arsenal got back to winning ways in the Premier League this weekend, with Alex Oxlade-Chamberlain and Mesut Özil grabbing the goals that secured a 2-0 win over Bournemouth. Our friends at All Arsenal have provided us with player ratings for the game, let us know what you think.

We put an end to our goal drought and disappointing run of results in one fell swoop, with two quick goals in the first half ensuring victory at Dean Court.

We climbed back above Manchester City in the Premier League with our 2-0 win, and hopefully will be spurred on by the goals.

Here’s how we rate the players from our 2-0 win over Bournemouth:

The Czech international ensured we kept our clean sheet with some fantastic saves, including a phenomenal double save in the dying minutes.

A lot of Bournemouth’s attacks came down our right, but for the most part Bellerin dealt with them well. He also prevented a certain goal and made up for a Gabriel Paulista error in the first half.

An excellent performance from the Spaniard who was once again our best and most consistent defender. There was one scary moment when he was caught ball watching, but other than that it was an excellent display.

At times Gabriel looks like a top quality defender, but then in the blink of an eye he turns into a Johan Djourou or a Sebastien Squillaci (bit of an exaggeration perhaps). He definitely has a mistake in him, but will hopefully continue to improve.

The Frenchman has also seen the odd mistake creep into his game recently, but overall it was a superb

The Frenchman had some really dodgy moments throughout the game, in particular after eight minutes when he recklessly lunged in two footed – arguably lucky not to see red.

It was a mixed bag from the midfielder, who showed some of his best and worst traits over the course of the 90 minutes. He was involved in both goals – getting the assist for Alex Oxlade-Chamberlain’s goal – and never shirked his duties in attack or defence. He gave possession away too often though, and was constantly taking long-shots that he had no right taking on.

Another fantastic performance from the German playmaker, who not only grabbed a goal but pulled the strings and orchestrated everything. His final delivery was occasionally not quite to his high standards – especially his corners – but he was still far and away the best player on the pitch.

As usual, he was occasionally sloppy in possession and gave the ball away in dangerous areas. He took his goal absolutely superbly though, and was active and aggressive in the first half in particular.

It was a shock not to see him starting, but he doesn’t quite look at his best; understandably so. He was reckless when he first came on as a substitute, but soon settled in and put in some good tackles. 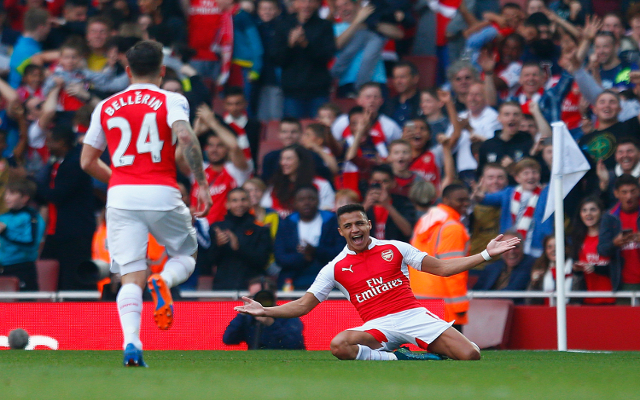 A solid performance from the Chilean, but he still doesn’t look quite back to his best. He had a couple of decent sights of goals, but couldn’t get the right purchase on his shots.

A solid cameo performance from the Englishman, who was clearly brought on just to sure things up late on.

He provided the assist for the opener and held the ball up well throughout. The service wasn’t fantastic in the second half, but he was still unlucky not to see a headed effort find the back of the net.