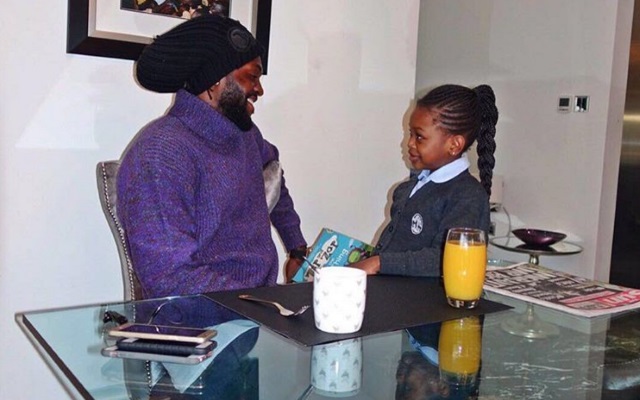 Crystal Palace frontman Emmanuel Adebayor has taken to Instagram to celebrate his morning routine which mixes the mundane with the bizarre.

The Togo attacker is something of an unorthodox character, but he appears to be content with life since signing a deal with Crystal Palace, having previously been released by Tottenham Hotspur earlier in the campaign.

Ade may have had his fair share on controversy, but with some good years ahead of him, and with experience of having featured for the likes of Arsenal, Manchester City and Real Madrid, the West African can clearly be a valuable asset to Alan Pardew’s Eagles.

And the striker appears to be happy with life on and off the pitch, as he revealed in an Instagram post earlier this morning.

“My routine every morning,” Ade posted, with a photo of the man himself sat at a glass table, conversing with a midget in front of a pristine glass of orange juice, a mug and a fork…and an old copy of The Sun newspaper, “and I love it.

“Breakfast with my lovely daughter, before I drop her off in school. Wishing everyone a great week ahead.”

As Gonzalo Higuain has demonstrated at Napoli this season—with an astonishing 24 goals in 24 games—a happy life off the field can work wonders on it.

Pardew will certainly be hoping that Ade—whose narcissistic tendencies are demonstrated by a photo of himself on the wall—can fire Palace back up the table.