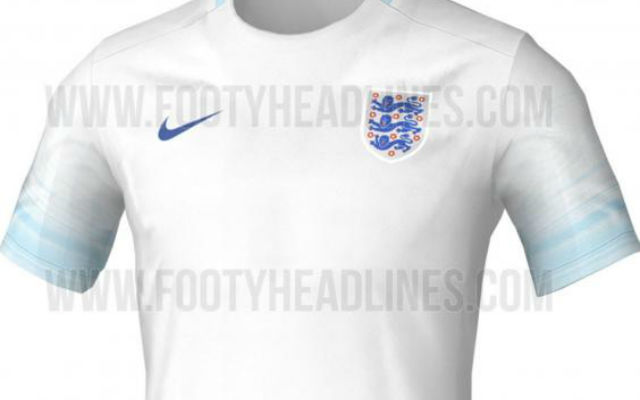 England’s home kit for the 2016 European Championships may have been accidentally leaked in a series of secret photographs.

According to the Independent—sharing photos from the website FootyHeadlines.com—the Three Lions’ home shirt for the summer competition in France has been revealed.

And it’s something of a departure for England.

Indeed, the latest designs demonstrate an off-the-wall design which contrasts England’s classic white shirts with something a little different on the sleeves. The images show a kit with a light blue trim around the collar—described as ‘ice blue’ by the Independent—and odd light blue rings around the arms.

The kit will certainly take some getting used to for purists—and it represents a major departure from the red or dark blue typically used in the trims of kit—but it looks to be the odds-on favourite for next summer, with the Independent noting that footyheadlines have ‘accurately unearthed’ new kits ahead of schedule in the past.

Comment below and let us know what you think of the new strip? Is it a sure-fire winner for Roy’s boys, or will it take a strong showing in France to endear itself to Three Lions fans?

Twitter has not taken kindly to the new shirt, with a number of commentators taking to social media to give their views on the potential new strip.

The kit England will be wearing when we hammer them in Lens. pic.twitter.com/eQZJhbxhkF

LEAKED: England’s kit for Euro 2016 has been revealed. What’s on the arms! ???? https://t.co/PlJQWXsaFi pic.twitter.com/nyWxuiUHUO

Leaked images of the New England kit, to be worn at #Euro16