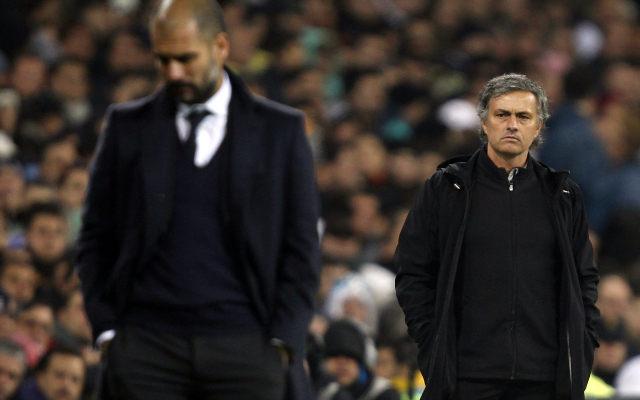 According to reports in Spain, Jose Mourinho would earn considerably less than Pep Guardiola should he join Manchester United.

The two coaches crossed swords infamously in La Liga when the Portuguese coach was in charge at Real Madrid and the Spanish manager took the helm at Barcelona.

Since then, the two have gone their separate ways, with Guardiola enjoying considerable success at Bayern Munich, and Mourinho enjoying title success back at Chelsea last season, before declining remarkably during the 2015-16 campaign.

According to El Confidencial [as per The Sun], Mourinho will receive £15 million-per-season should he sign for Manchester United as Louis van Gaal’s replacement at the end of the season.

The tabloid notes that, while princely, Mourinho’s fee would be a whopping £6 million less than his old rival Guardiola would be receiving at Manchester City.

However, despite the intense speculation persistently linking Mou to Old Trafford, it’s worth noting that nothing has been confirmed, and for the time being there is no certainty as to the identity of United’s coach next season.

Van Gaal could yet stick around, while Ryan Giggs or Mauricio Pochettino have also been touted as potential replacements for the troubled Dutchman.