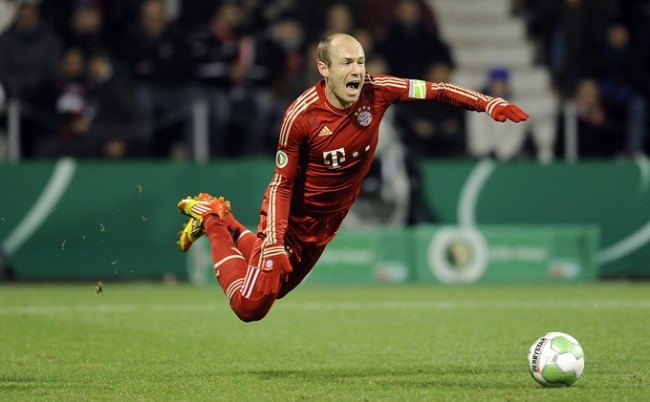 In light of Bayern Munich‘s 3-0 victory over VfL Bochum in the quarter-final of the German Cup on Wednesday, Arjen Robben‘s sportsmanship has again come under scrutiny.

The Netherlands wideman has long carried a poor reputation as a diver, and someone who is willing to break the rules in order to get an advantage.

The winger has long gone to ground too easily—a trait that was evident during his time in the Premier League with Chelsea—and it’s a foible that he’s never truly ironed out of his game.

Speaking after the match, Gertjan Verbeek slammed Robben, who won a penalty for Bayern with Pep Guardiola’s side leading 1-0, after falling easily after a tackle from Jan Simunek.

The ‘foul’ also saw Simunek dismissed, and as Thomas Muller converted the spot kick, it essentially killed the game as a contest.

“In my opinion, the ball was played and the red card wasn’t justified,” the Dutch coach began, as per Goal. “It was purely diving.

“Maybe there was contact, but this is the Robben we know. Normally, I am proud of being a Dutchman, but here I am ashamed.”