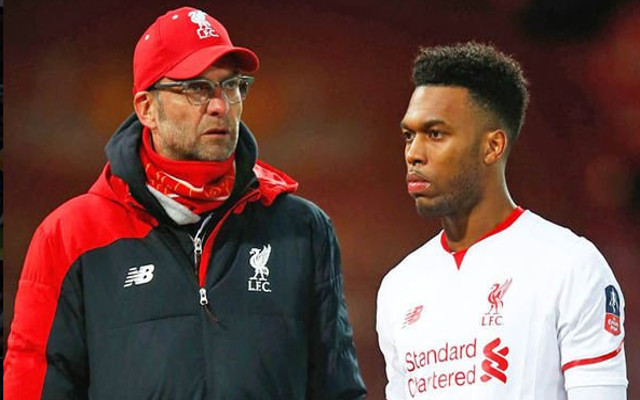 Liverpool‘s hopes of finishing the 2015-16 campaign with any silverware were damaged last week when they lost to West Ham United in the FA Cup. But after seeing his team decimate Aston Villa en route to a 6-0 romp at Villa Park, Jurgen Klopp believes that the fitness of Daniel Sturridge could play a big role in helping their Europa League ambitions when they play Augsburg in a few days.

In an interview with This Is Anfield [per Squawka], Klopp expressed hope that the oft-injured striker will be able to continue his strong form and stay healthy enough to be available when the team travels to Germany to take on Augsburg.

Sturridge was the first of six Liverpool players to put the ball in the net against Aston Villa, giving him three Premier League goals in just six appearances this season.

“It made sense to take him out. It was okay, it was perfect for him. Hopefully he’s available for the next game too,” Klopp said regarding his decision to pull Sturridge after two-thirds of the match.

Klopp has been careful to manage Sturridge’s minutes out of fear that he might aggravate nagging injuries that have plagued him for over a year. The 27-year-old striker has not played a full ninety minutes since October.