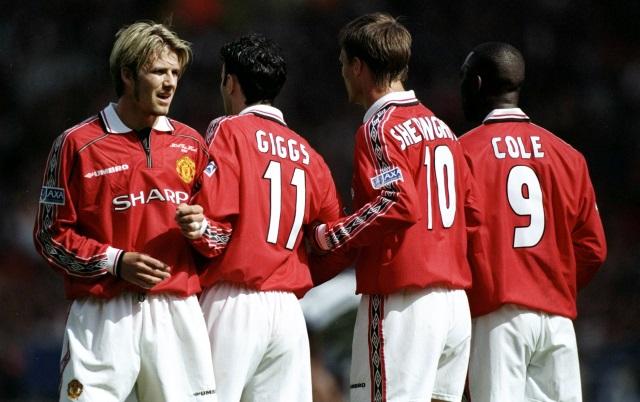 Tottenham Hotspur star Harry Kane has revealed how he and his teammates are inspired by Manchester United‘s legendary ‘Class of 92’.

The term ‘Class of 92’ refers to the generation of Fergie Fledglings—including David Beckham, Paul Scholes, Ryan Giggs, Nicky Butt and the Neville brothers—who went onto establish themselves in the Red Devils first team, before going on to enjoy great success at Old Trafford.

That collection of players proved that faith in youth can lead to great success in English football, as proved by Sir Alex Ferguson and his magnificent collective.

The current side, featuring young and/or homegrown talent such as Kane, Dele Alli, Eric Dier, Kyle Walker, Ryan Mason and Danny Rose is hoping to emulate United’s success in the mid-to-late 90s.

“It shows that it can be done. They had a great team and dominated for years,” Kane began, speaking to The Sun.

“With our squad, how young it is, and adding the new stadium in a few years, the future is bright,” the striker continued.

Heading into Sunday’s heavyweight clash with Manchester City, the Lilywhites find themselves up in second, five points behind leaders Leicester City, level with neighbours Arsenal, and one ahead of their rivals on Sunday, the Sky Blues.

While Spurs fans would surely have been content with a fourth-placed finish ahead of the season, the possibility of an automatic berth in the Champions League group stage, or even a first title since 1961, would make for one of the greatest campaigns in the club’s history.