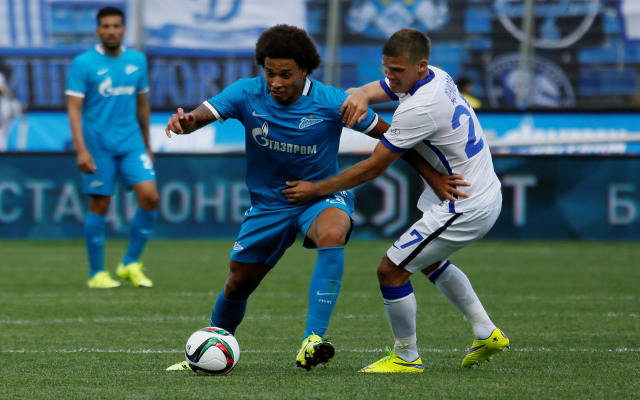 Zenit St. Petersburg midfielder Axel Witsel has insisted that he is not looking to leave his current club, despite interest from elsewhere.

The box-to-box operator has been heavily tipped for a move away from the Russian Premier League in recent transfer windows, with the likes of Chelsea and Tottenham Hotspur understood to be monitoring the Belgian international.

Similarly, Serie A heavyweights AC Milan have also been keeping tabs on the midfield general with a view to bringing him to Lombardy.

Witsel comes up against his former club Benfica in the Champions League round of 16 later this week and, speaking ahead of the bout, he has revealed that he’s happy with live at Zenit and intimated that he’s not looking for a move away from the club.

“It wasn’t easy [to adapt to live in Russia] – I mean the weather,” Witsel began, speaking to Uefa’s official website. It’s very cold here, it’s a lot warmer in Portugal.

“So it wasn’t easy for the first year and a half. But I think I adapted quite well to Russia and to Zenit, and today I am happy to be here.”

It’s easy to see why Chelsea have been keen on moving for the dynamic 27-year-old in recent times; Cesc Fabregas and Nemanja Matic have failed to rediscover the immense form they demonstrated during the title-winning 2014-15 season, while it remains to be seen whether Nigerian midfielder John Obi Mikel is a long-term solution at the club, and Ramires has departed for the Chinese Super League.