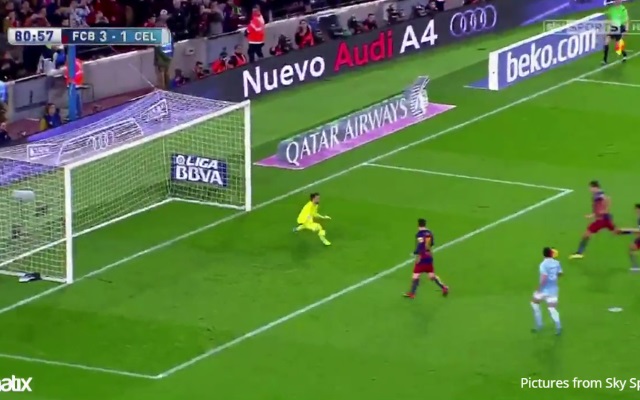 During Barca’s 6-1 La Liga demolition of Celta Vigo this weekend, Messi won a penalty during the final ten minutes of the match.

Instead of firing the spotkick past Celta keeper Sergio Alvarez, Messi opted to roll the ball to his right where Luis Suarez—looking for a third goal to complete his hat-trick—gleefully finished with aplomb.

The Uruguayan’s effort put Real Madrid 4-1 up, before Ivan Rakitic and Neymar added late efforts to round off a convincing triumph.

Speaking on Game On on 2FM [as per RTE] former midfielder Dunphy has accused Messi of lacking class, and insisted that the Argentine superstar should apologise for his disrespectful behaviour.

“None of the great players of the past would have ever dreamt of doing anything like that.

“Everyone who loves football, loves Messi and he let himself down, big time. He let the game down, he should apologise and he should be reprimanded by his coach.

“You don’t mess with the game, it’s sacrosanct.”

Intriguingly, despite Dunphy’s comments, two players typically considered among the game’s greatest—Johan Cruyff and Thierry Henry—have also attempted to pass a penalty rather than finish it themselves.

However, while the Dutch master successfully finished his effort, the former Arsenal star humiliated himself when he and Robert Pires attempted a similar trick in a Premier League match.