The Blues – 12th in the Premier League – face a massive task in their Champions League last 16 tie against PSG, who are 24 points clear at the top of Ligue 1 and unbeaten after 26 fixtures in France’s top division this season.

To make Chelsea’s task even harder, they travel to the Parc des Princes without captain John Terry and fellow first-choice centre-back Kurt Zouma.

Terry damaged a tendon in his right leg during Saturday’s 5-1 win over Newcastle United, according to The Guardian, while Zouma is out for the rest of the season with a serious knee issue, as reported by the Daily Star.

These injuries will almost certainly result in a start for Gary Cahill, while Branislav Ivanovic is expected to move into the middle from right-back.

Chelsea’s other centre-back option is January signing Matt Miazga, but the young American is unlikely to make his debut in such a high-profile event.

With Ivanovic vacating his right-back slot, Cesar Azpilicueta may switch from the left side of Chelsea’s defence, freeing up a place for Baba Rahman, who played in three of Chelsea’s group games – the Blues won all three of these matches.

Guus Hiddink may give his midfielders more defensive responsibility than usual to help out his cobbled-together back four. With Nemanja Matic suspended, Ruben Loftus-Cheek partnering John Obi Mikel makes sense. The powerful duo could sit deep, with the players ahead of them primed for counter-attacks.

Counter-attacks rely on pace, which should be provided in spades by Willian and Pedro.

Finally, Diego Costa has been rejuvenated under Hiddink, who will be hopeful that the Spanish striker can link up with countryman Cesc Fabregas to rekindle the fire in their partnership which destroyed English defences for fun during the first half of last season. 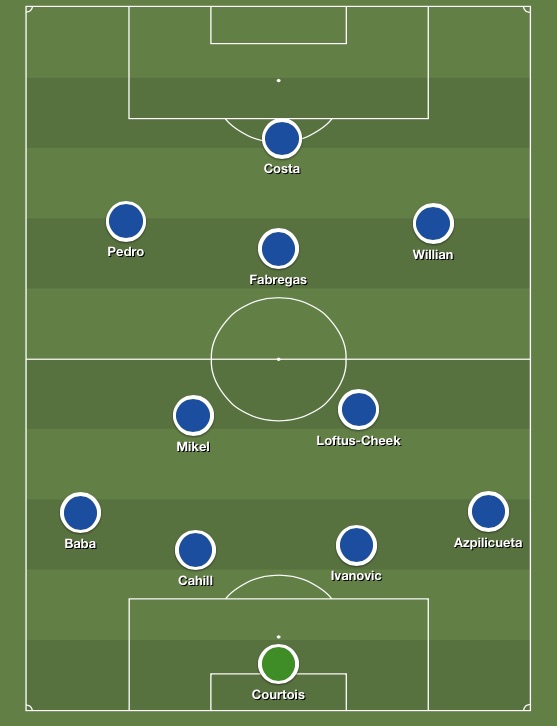 Chelsea star waiting for meeting with Blues before deciding whether or not to accept transfer offer
May 17 2022, 13:10
Chelsea FC
Everton have themselves to blame for implosion, lucky West Ham, and a well-managed cup final between Liverpool and Chelsea – Mark Halsey column
May 16 2022, 11:12
Ex-PL referee suggests West Ham defender was lucky not to concede penalty vs. Man City
May 16 2022, 10:23
Manchester City
Nemanja Matic opens up on Manchester United goodbye amid expiring contract
May 11 2022, 9:48
Manchester United FC
Juventus look set to sign Manchester United star this summer
May 8 2022, 14:00
Manchester United FC
Barcelona agree deal for Chelsea star who will earn €13m a year
May 7 2022, 12:54
Chelsea FC
Barcelona remain confident of signing Chelsea star despite contract extension
May 2 2022, 15:41
Chelsea FC
Chelsea defenders accused by pundit of having “switched off” in recent games, videos show he’s got a point…
May 2 2022, 8:45
Chelsea FC
Roma set their sights on Premier League in pursuit of midfielder
Apr 28 2022, 8:45
Manchester United FC
Video: Man United’s Nemanja Matic aims cheeky dig at Arsenal fans after being subbed
Apr 24 2022, 9:24
Chelsea FC