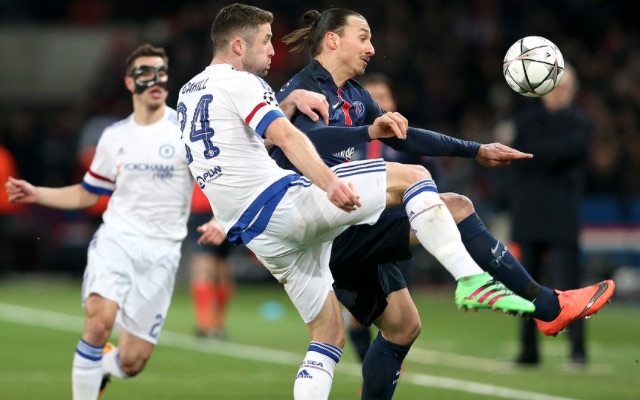 The blockbuster Champions League last-16 tie between Chelsea and Paris Saint-Germain is perfectly balanced after the first leg in France ended 2-1 to the hosts.

John Obi Mikel cancelled out Zlatan Ibrahimovic’s opener with the last kick of the first half before Edinson Cavani gave PSG an advantage, if only on the scoreboard.

SEE MORE:
David Luiz thanks Chelsea for great time prior to beating them in Champions League
Tweets: Hilarious reactions to John Obi Mikel’s goal against PSG

But, with an away goal to take back to Stamford Bridge and a performance which showed that they can hang with the French champions, the Blues have every reason to be optimistic.

Chelsea were without injured captain John Terry as well as Kurt Zouma and Nemanja Matic, which made any rearguard action that they had to take even more difficult.

The first 20 minutes suggested that the whole game was going to be a containing job for the Premier League side. PSG had all of the ball and move it very quickly.

But it was his opposite number Kevin Trapp who made the outstanding save of the match, tipping Diego Costa’s header onto the bar with a nonchalant wave of his hand.

That chance on the counter-attack gave the Blues the belief to establish a foothold in the game. They halted the PSG momentum, but could not keep them out forever.

Minutes after squandering a good headed chance at the back post, Zlatan smashed a free-kick against Mikel in the Chelsea wall and beyond Courtois to make it 1-0.

It was the Swede’s first ever goal against the Blues, whom PSG have faced in this competition in each of the past three years, and 46th Champions League goal in total.

But Chelsea snatched a crucial away goal in first-half stoppage time, from the unlikely boot of Mikel. He volleyed home from a corner after a near-post Costa flick-on.

The visitors again had to defend for a lengthy spell at the start of the second period, with PSG upping the anti throughout the first 20 minutes following the restart.

But the concentration levels and workload may have caught up with Gary Cahill, who fell to sleep to allow Cavani to run off him and notch PSG’s second on 78 minutes.

The Uruguayan substitute faced a difficult angle which Courtois should have closed off at his near post, but managed to squeeze the ball through the goalkeeper’s legs.

It was a slip-up which marred the Belgian’s otherwise fine display, on a night when Chelsea stood up from back to front. Ivanovic and Willian were particularly excellent.

Two-one is a deficit that Chelsea will probably be content to take back to London, but it was so nearly three as Ibrahimovic wasted a chance on the last attack of the evening.

The enigmatic striker was perfectly positioned to score at the back post when Courtois rushed off his line to make a vital intervention, and keep the tie hanging by a thread.