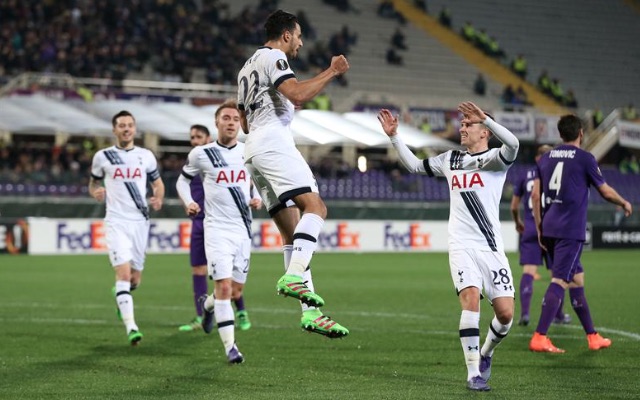 It was a job well done for Tottenham Hotspur as they secured a 1-1 draw to take back to White Hart Lane for the second leg of their Europa League tie with Fiorentina.

Nacer Chadli bagged the crucial away goal for Spurs with a penalty. Federico Bernardeschi’s deflected second-half shot brought the scores level after the break.

The result puts Tottenham in pole position to qualify for the last 16 next Thursday, during a week in which they also face important FA Cup and Premier League matches.

Mauricio Pochettino showed his intent to balance his squad for competition on three fronts throughout the rest of the season with a hedge-your-bets selection.

Alli was involved in the biggest incident of the opening half an hour. The 19-year-old has been universally praised this season, but caught the eye for the wrong reason.

He gave Fiorentina full-back Nenad Tomovic a blatant and unnecessary kick to the ribs after the ball had rolled behind, and probably should have been shown a red card.

Alli got away with a yellow, but Tomovic did not escape unpunished when he lunged in on Ben Davies as Spurs were awarded a debatable penalty seven minutes later.

Chadli, leading the line in the absence of the rested Kane, stepped up to slot the spot kick into the bottom corner for his fifth goal in his last seven appearances.

Tottenham were denied a two-goal lead a couple of minutes into the second half when Son Heung-Min’s header from a free-kick was correctly ruled out for offside.

The visitors threatened again soon after. Dembele, on for Tom Carroll at half time, sent Chadli clear but the goalscorer’s right-footed shot was saved low at the near post.

Fiorentina, third in the Serie A table and unbeaten in five matches, had shown next to nothing from an attacking perspective before their lucky 59th-minute equaliser.

Bernardeschi had a pop from 30 yards out and his shot took a big deflection off stand-in Spurs captain Ryan Mason, looping over Michel Vorm and into the top corner.

The Viola had a 10-minute spell of reasonable pressure in which Vorm saved from Matias Vecino, but the introduction of Eric Dier helped Tottenham ride the storm.

Dier with a long-range piledriver, and Alli with a decent overhead kick a couple of minutes from time, were the closest that Spurs came before a final Fiorentina rally.

Vorm was needed once more to keep out a deflected strike from ex-West Ham United forward Mauro Zarate, while Gonzalo Rodriguez glanced a header wide from six yards out.

Fiorentina made a cheeky attempt to get Tottenham talisman Kane suspended for the second leg late on. Can you believe that the England striker was booked for this?