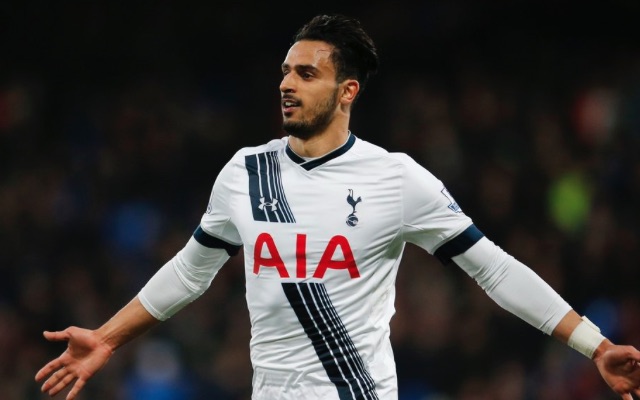 The refereeing gods seem to be shining on Tottenham Hotspur at the moment.

Spurs were given a ridiculously soft penalty in their 2-1 victory over Manchester City in Sunday’s Premier League title showdown, and their spawn has followed them into the Europa League.

At first glance, it appears as though Nenad Tomovic tripped the charging Ben Davies, but replays show that the Welshman went down after stepping on the foot of the unlucky Fiorentina defender.

Nacer Chadli, deputising up front to give Harry Kane a breather, calmly converted the penalty into the bottom corner for his fifth goal in his last seven appearances for Spurs in all competitions.

But, as the video above shows, the penalty decision was not the only refereeing decision went Tottenham’s way in the opening 45 minutes of the first leg of their last-32 tie in Florence.

Dele Alli was very fortunate to remain on the pitch for blatantly kicking Tomovic in the ribs after the ball had rolled behind for a goal kick. The teenage prodigy received only a yellow card.

Spurs will hope that lady luck continues to be with them between now and the end of the season, as their young and hard-working side attempt to compete for trophies on three different fronts.