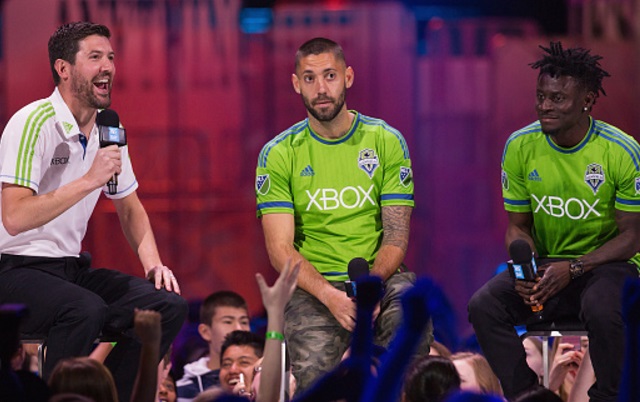 Having completed his move from Seattle Sounders to Shanghai Shenhua, Obafemi Martins has published an open latter thanking his former club.

The striker has enjoyed great success in Major League Soccer since joining the Sounders in 2013, winning the MLS Supporters’ Shield, the Western Conference and the Lamar Hunt U.S. Open Cup all in 2014. Similarly, he made the MLS Team of the Year in 2014, was an MLS all-star in 2015 and scored the Goal of the Season in 2014.

Thanks to all who made these last three years an amazing experience. Seattle has a special place in my heart ???????? pic.twitter.com/qg3XxYRzbK

Overall, the 31-year-old scored 43 goals in 84 appearances in Major League Soccer, even if he never truly managed to reestablish himself in the Nigeria squad.

However, as confirmed by BBC Sport earlier this week, the hitman has completed his move away from the Sounders, securing a ‘multi-million dollar deal’ to join the Chinese heavyweights.

Ba joins Senegal forward in Shanghai, while he becomes the latest in a swathe of internationally recognized players to try their hand in the CSL. Over the last month, the likes of Jackson Martinez, Ezequiel Lavezzi, Stephane Mbia, Gervinho and Ramires have all swapped life in a major European league for a switch to the Far East.

“Thank you Seattle. Thank you for everything. Thank you for the memories that will last a lifetime,” Martins began, in an open letter shared on his @Obafemimartins handle.

“For me, it’s now time for a new challenge,” he continued. “After significant reflection I have decided to join Shanghai Greenland Shenhua FC of the CLS.

“Seattle will always have a special place in my heart.”

The striker has had a nomadic career and featured for the likes of Newcastle United, Wolfsburg, Rubin Kazan, Birmingham City and Inter Milan.