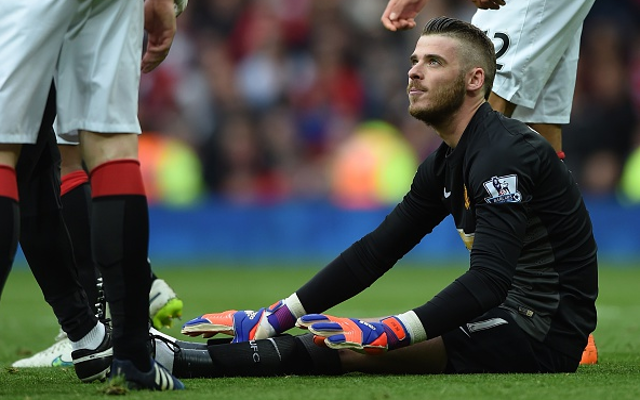 As if losing to FC Midtjylland wasn’t bad enough, Louis van Gaal is also heading back to Manchester facing the prospect of being without David De Gea for coming matches.

Manchester United were humbled by the Danish side on Thursday evening in Europa League action, taking the lead through Memphis Depay, before goals from Pione Sisto and Ebere Paul Onuanchu secured a big win for the home side.

However, the defeat dents United’s chances of advancing to the final and of potentially winning the competition which, considering their league position, represents the club’s best chance of securing qualification for the Champions League next season.

With United six points behind their rivals Manchester City, who currently occupy the final Champions League qualifying spot, the Red Devils will be placing major importance on their European campaign.

They were without De Gea for the loss on Thursday, with the Spanish keeper injured in the warm-up.

Speaking after the match [in quotes relayed by the Mirror], van Gaal admitted that he would have to wait until the results of a scan to know how long De Gea will have to spend on the sidelines.

“It happened in the warm-up,” the beleaguered van Gaal admitted. “We have to wait and see the scan tomorrow and then maybe we can say more. It was a big surprise [to lose De Gea].”