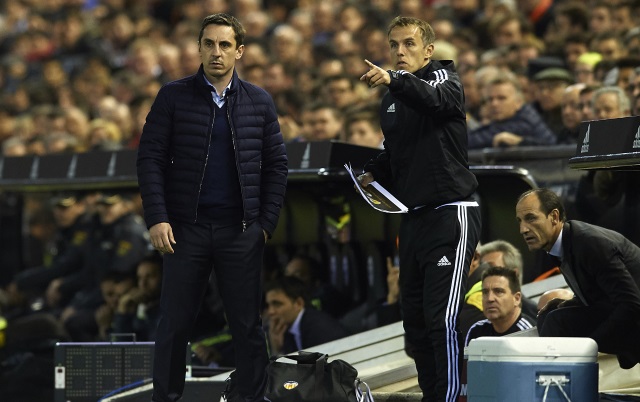 Gary Neville finally appears to be turning things around at Valencia, but the Manchester United great is refusing to get too carried away.

The ex-England right-back celebrated his 41st birthday on Thursday by demolishing Rapid Vienna 6-0 in the Europa League, a win that almost guarantees the Spanish giants will take their place in the Last 16 of Europe’s secondary club competition.

Neville has steadily begun to improve results at Los Che, after overseeing a considerable winless streak in the league.

Things appeared to be getting sticky for the rookie coach and ex-Sky Sports pundit following a 7-0 defeat to Barcelona in the Copa del Rey and a dismal defeat to Real Betis in La Liga.

However, the manager ended his miserable run with a victory over Espanyol in the Spanish top flight last weekend, and followed that up with a stocking triumph over Rapid on Thursday.

“Obviously the result makes it my best night in Valencia,” Neville assured reporters after the match, quotes as per the Independent.

“But I’ve never celebrated victories halfway through the season and this will not be the first time.”

The Europa League represents arguably Valencia’s best hopes of securing a berth in next year’s Champions League as, following their miserable league run, the fallen giants of the Spanish game currently find themselves down in 12th in the top flight, and are a whopping 20 points behind fourth-place Villarreal.