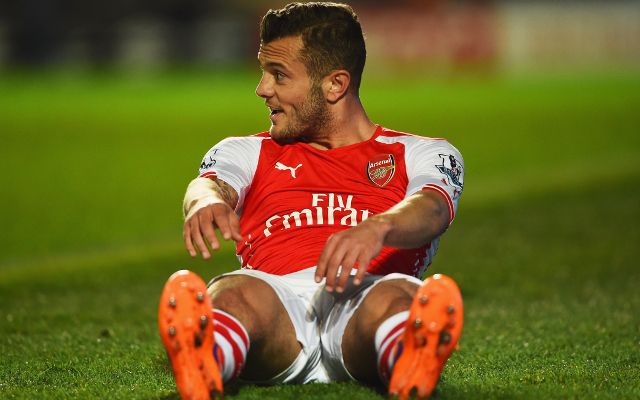 Despite having not made a single appearance for Arsenal this year, injured midfielder Jack Wilshere is determined to make an impact for the club before the end of the 2015-16 campaign and fight his way onto the England roster for Euro 2016. With his recover from a summer injury almost complete, Wilshere has identified a possible date for his return.

In an BT Sport discussion with presenter Jake Humphrey [per the Metro], the 24-year-old midfielder was pressed to pick a date to return, to which Wilshere replied that it could be the second-leg of the Champions League against Barcelona.

‘I’m running. It gets harder and harder to get back into the Premier League,’ Wilshere said.

When asked if he could return for the Barcelona match, he added, ‘Maybe… three weeks. I hope so. Maybe.’

Wilshere also revealed this past week that his motivation to get fit for the tail-end of the Arsenal season stems from his desire to play for England in Euro 2016. Injuries kept him from being capped much in 2015 – he was featured only twice but recorded a brace against Slovenia in the Euro qualifier back in June.

‘That’s what keeps you going,’ he said. ‘When you’re in the gym, it’s hard work. Seeing the other boys going training and enjoying it – it’s tough.

‘Knowing that I set myself a target of going to the Euros and getting back to help the lads win the Premier League – that’s what keeps you going.’

England take on Russia in their first match of the tournament in June, but play a handful of friendlies between March and May.