Arsene Wenger takes charge of his 100th FA Cup match as Arsenal manager this afternoon as the Gunners host fellow 2014 finalists Hull City in round five.

Changes are expected, as Wenger keeps one eye on next week’s clash with Barcelona.

We have no idea who is going to play for the Gunners, but our friends at All Arsenal have a pretty good record at predicting Wenger’s starting XIs.

This is how All Arsenal reckon the hosts will lineup at the Emirates. Keep reading for the explanation… 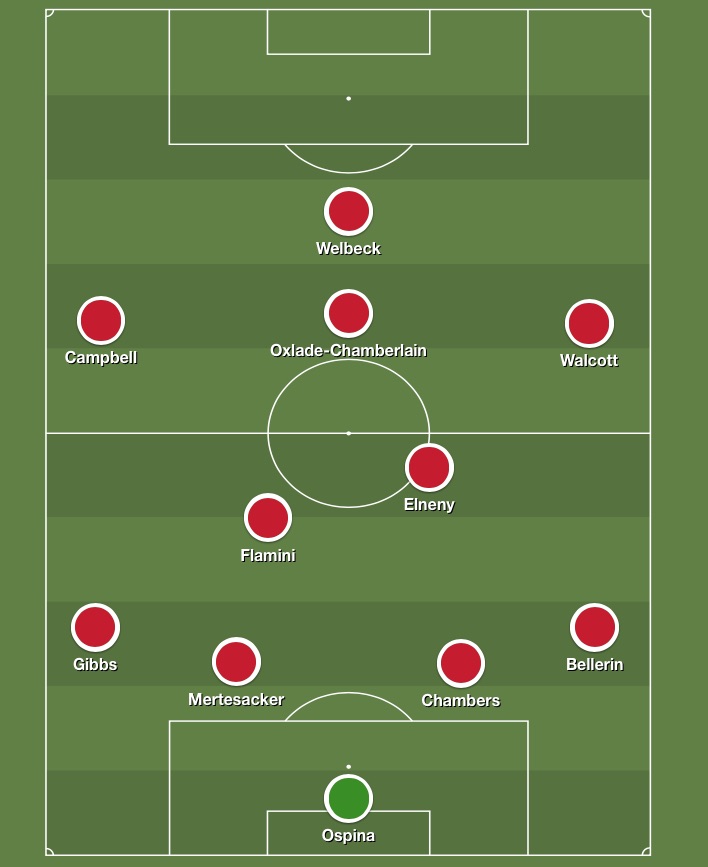 The Colombian hasn’t exactly impressed when given the chance this season, but the FA Cup is really the only chance he’s going to get to play ahead of Petr Cech.

If given the choice Arsene Wenger might prefer to rest the young right-back, but with injuries to our centre-backs he may not have the option. Bellerin’s only back-up at the moment is Calum Chambers, and he may be required at centre-back.

Monreal seems likely to be rested ahead of our clash with Barcelona, with Gibbs proving a reliable replacement this season.

Mertesacker missed a few games following his red card against Chelsea, but was brought back into the side in Gabriel Paulista’s absence.

Laurent Koscielny and Gabriel Paulista are both nursing injuries (via the Metro), and while the Frenchman should be back in time, Wenger might continue with Chambers at the back.

With Francis Coquelin only recently returning from injury, Wenger may opt to return Flamini to the side and rest the younger Frenchman for Barcelona.

Elneny has shown he’s capable of playing a deeper role or pushing a little further forward, and he seems likely to start in a box-to-box role against Hull.

We’ve been getting mixed performances from the Ox this season, but hopefully he can show that playing centrally is where he belongs.

Walcott came on and got a vital goal against Leicester City, and should therefore be rewarded with a start against Hull. He would obviously prefer to start against Barcelona, but he’ll need a performance this weekend to prove he deserves it.

Campbell has been out of the starting XI recently, but like many others should get his chance in the cup. There are other wide options, but Campbell seems among the most likely to start.

Having only just come back from a ten month spell on the sidelines, Danny Welbeck marked his return with a massive goal against Leicester. He’s unlikely to play more than an hour, but will almost certainly feature at some point and may well get a start.