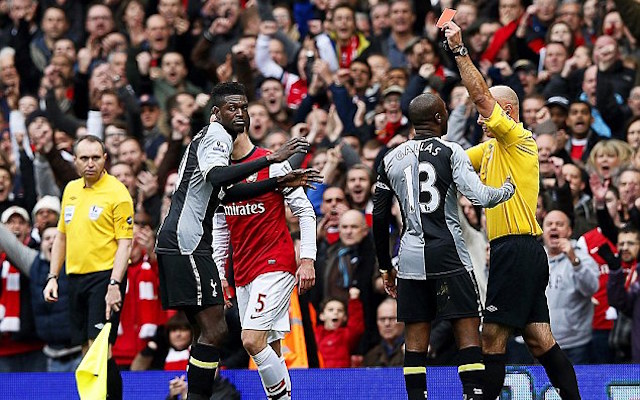 Emmanuel Adebayor will have the opportunity to show Tottenham Hotspur what they’re missing when Crystal Palace face Spurs in the FA Cup on Sunday.

Speaking ahead of the match, Lilywhites defender Kevin Wimmer has insisted that he and his teammates are not fazed by the Togo striker’s return to White Hart Lane on Sunday.

“I know him from the first two weeks when I arrived at the club,” said Wimmer, as reported to the Mirror. “But he wasn’t training with us so I don’t really know him. I have only seen him play on television.

“Some of the guys know him and we will focus on the game and work together to try to stop him as a unit,” he continued.

“He is the typical striker who you play against every week in the Premier League. It is good for a defender like me to fight against players like this,” continued the Austria international.

“For 90 minutes, you have to be focused and ready and it is not easy to play every game against players like him. But it is a good opportunity for us to show we are very good at the moment.”

Wimmer has impressed since replacing Jan Vertonghen, who has been sidelined with injury since Spurs’ last clash against Palace when he had an altercation with Connor Wickham.

The Austrian defender has shone alongside Toby Alderweireld in the heart of the Tottenham backline, but his comments may only serve to motivate Adebayor, who demonstrated memorably against Arsenal when in action for Manchester City, that he loves little more than sticking it to former employers.

The striker spent the best part of four seasons at Spurs, spending the 2011-12 season on loan at the club, before signing permanently from Manchester City in 2012. He started strongly at White Hart Lane, only to lose his way—as he had done at City—under Mauricio Pochettino and, before that, Andre Villas-Boas.