Manchester City travel to Chelsea today for an FA Cup fifth-round clash which kicks off at 4pm.

Indeed, the timing of this fixture is crucial. That’s because it comes just less than 72 hours before City have to play the first leg of their Champions League last 16 tie with Dynamo Kiev – 1,330 miles away – and just a week before Manuel Pellegrini’s men are due to face Liverpool in the Capital One Cup final at Wembley.

With those upcoming tests in mind, Pellegrini plans to name a “second string” at Stamford Bridge, according to the Daily Mail.

The Guardian also anticipate wholesale changes, having tipped the 2011 winners to include four teenagers in their starting XI v Chelsea.

Eighteen-year-old Spaniards Aleix Garcia Serrano and Manu Garcia, plus Bersant Celina and Kelechi Iheanacho, both 19, are included in the Guardian’s predicted XI (below), which was published in their online match preview.

Of the quartet, Nigerian striker Iheanacho is the most experienced, having already featured in 21 first-team games for City, scoring seven times, including a hat-trick against Aston Villa earlier in this season’s FA Cup. The majority of Iheanacho’s appearances have been as a sub, though. This would be only his seventh start since his promotion to the senior side.

Manu and Norwegian midfielder Celina have also had a taste of first-team action. Manu made two sub appearances in the Capital One Cup last year, making his debut in the 4-1 win over Sunderland, before scoring in the 5-1 thrashing of Crystal Palace. Meanwhile, Celina has been used off the bench three times in 2016.

Aleix is the only one of the aforementioned teenagers who is yet to make his debut. He joined City from Villarreal last summer, having played just one senior game in Spain – a brief cameo in a 4-0 defeat to Athletic Bilbao last season. 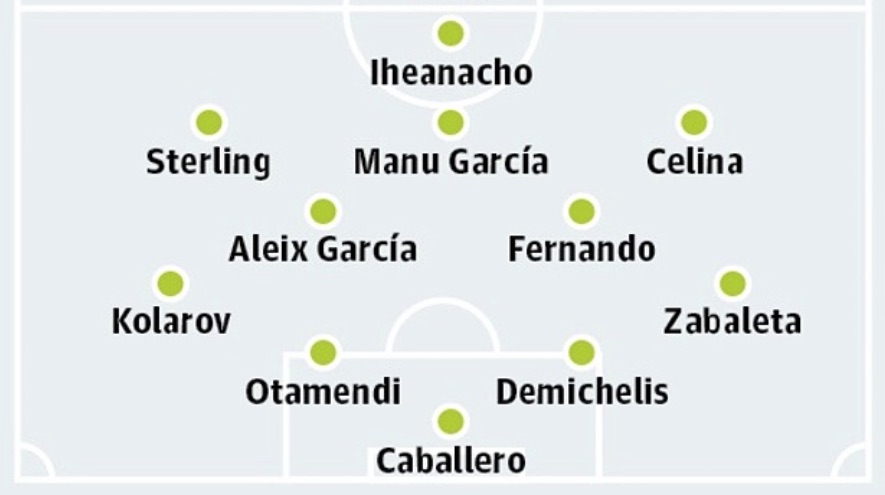