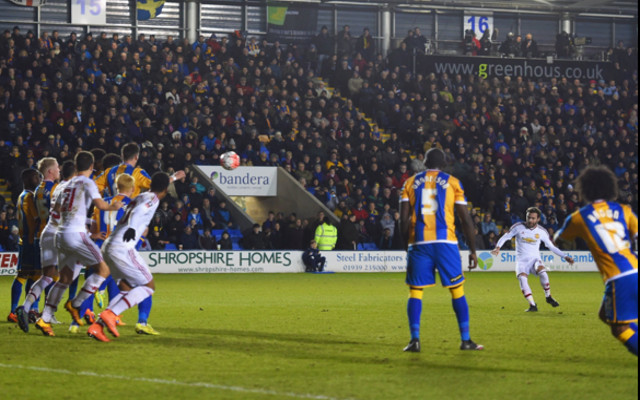 The Red Devils are determined to make it through to the next round of the FA Cup – by hook or by crook apparently – and may have just turned to the latter option on the Juan Mata goal that gave them a 2-0 lead against Shrewsbury Town.

With a free kick set up, a group of Manchester United players set themselves up in a wall directly in front of Shrewsbury goalkeeper Jason Leutwiler. The players ran up just as Mata was kicking the ball but Leutwiler was still blocked and unable to see the kick – allowing for an easy goal that sent them into halftime ahead 2-0.

The question immediately emerged whether the players were offsides during the play – to which the commentators and halftime pundits unanimously agreed should have drawn the flag.

Nevertheless, between the earlier Chris Smalling goal and the second-half Jesse Lingard goal, Shrewsbury fans most likely won’t be complaining that the lone controversy was the reason they lost the game.