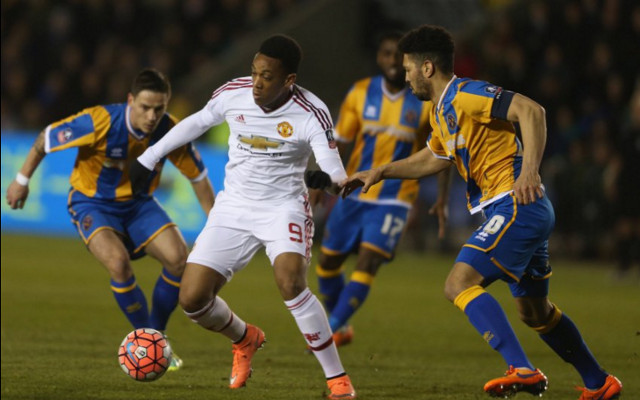 Have the standards at Manchester United really fallen so low that a win over League One minnows Shrewsbury Town FC is now considered a great victory? According to the fan on Twitter that just might be the case.

The Red Devils were able to beat Shrewsbury Town in a 3-0 away win that will send them to the FA Cup quarter-finals against West Ham United on March 12. They did so with a rather diminished roster that has lost most of its stars due to injuries over the last few weeks, most recently to Wayne Rooney and David de Gea.

Nonetheless, they were still outclassed by FC Midtjylland in the Europa League last week after being stunned late by lowly Sunderland.

As a result, Man United fans on Twitter were only slightly enthused by the fact that they were able to end their losing ways against the likes of Shrewsbury Town – perhaps “saving” Louis van Gaal’s job in the process:

It’s funny how wins against Derby and Shrewsbury are going to save Van Gaal’s job. Epitomises how badly our board understands football.

It’s nice to see our fans happy for once. Some of you need to tone it down a bit. Shrewsbury got spanked 7-1 last week

When you see your philosophy finally become a reality…

LVG keeps his job thanks to beating league 1 side Shrewsbury