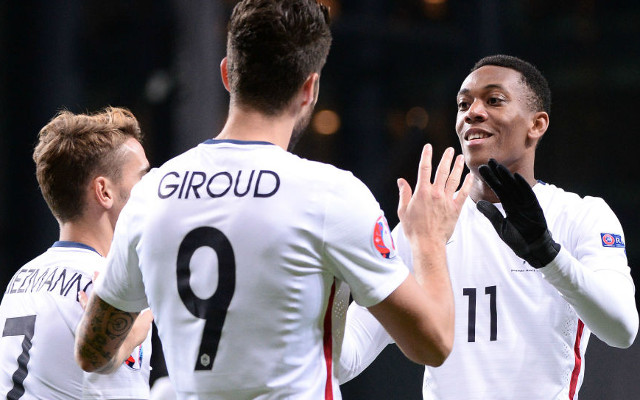 While Manchester United forward/winger Anthony Martial has been making a name for himself since the tail-end of 2015, Arsenal striker Olivier Giroud has the leading scorer on one of the top teams in the Premier League all season. However, despite having more success at home and abroad, Giroud may have found himself falling into the shadow of the French Golden Boy.

According to the Metro, a recent poll of French football fans by L’Equipe ranked Giroud as the third most popular choice to lead France up front in the Euro 2016 tournament this summer after Atletico Madrid scoring machine Antoine Griezmann and the 20-year-old Man United starlet.

In the poll of 1.1 million people, Griezmann claimed 16% of the vote while Martial got 13%. Giroud finished behind the pair with 12% of the vote – which was still more than controversial Real Madrid star Karim Benzema (10%) and West Ham United ace Dimitri Payet (8%).

Chelsea forward Loic Remy trailed the field with 0% of the vote.