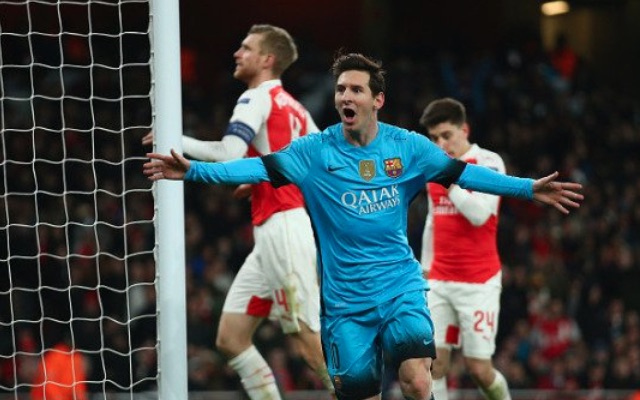 Lionel Messi scored twice as Arsenal eventually surrendered to Barcelona in the first leg of their Champions League last-16 tie at the Emirates Stadium tonight.

A pair of second-half goals from the Ballon d’Or winner condemned Arsenal to a familiar two-goal deficit which they have little chance of overturning in March’s return leg.

The hosts remained in the tie until Mathieu Flamini’s comical introduction. The Frenchman gave away a penalty less than a minute after coming on as a late substitute.

The Gunners have been knocked out in the last 16 of this competition in the past five seasons, having lost the first leg by a two-goal deficit on four of those occasions.

There was no comfort to be taken from home advantage either. Three times in their recent last-16 hoodoo, Arsene Wenger’s side have been beaten on their own patch.

Everything possible was done to guarantee that this was not the same story. They harried Barcelona constantly, hunting in packs to restrict them of time and space.

Arsenal’s tactics initially worked as Barca failed to call Petr Cech into action once during the whole of the first half. The hosts actually had the best chance before the break.

Ter Stegen also made a vital intervention in the second half – getting down low to claw an Olivier Giroud header off the line when the scores remained deadlocked.

That was as close as Arsenal would come on a night when the effort of Sanchez and Mesut Ozil could not be questioned. They just weren’t as good as what Barca had.

Sanchez switched off on defensive duty at the end of the opening period, and Dani Alves was able to profit on one of his countless adventures down the Barcelona right.

He delightfully cushioned a Sergio Busquets dink across the box for Luis Suarez, but the former Liverpool striker glanced his header wide of the far post in stoppage time.

Neymar appeared the most dangerous of Barcelona’s feared front three for much of the game, and was sent through one-on-one with Cech a few minutes after the restart.

The Brazilian had Messi square of him, but opted to shoot. Cech made a crucial block with his legs. Could he be the difference for Arsenal on another big European night?

No, as it turned out. Neymar would not miss the opportunity to feed Messi again when Barcelona’s attacking trident broke upfield to devastating affect on 71 minutes.

Neymar exchanged a one-two with Suarez and was not followed. Messi, in acres of space at the back post, calmly took his time before lifting the ball over a scrambled Cech.

Suarez, having dragged a shot wide minutes before the goal, squandered a glorious chance to make it 2-0 when he struck the post from six yards out only a few minutes later.

A lucky escape for Arsenal, but Flamini gifted Barca a second when he was caught on his heels and Messi, who tucked away the penalty, pipped him to the ball in the area.

Messi had never previously scored past Cech in six attempts. He ended that record this evening, and perhaps ended Arsenal’s hopes of reaching the quarter-finals in the process.