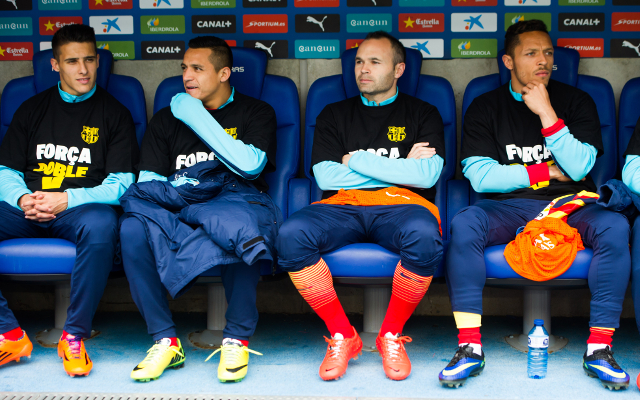 Such is Barcelona‘s strength in depth and their domestic dominance that Luis Enrique was able to shuffle his pack at the weekend, and will be able to call upon a series of fresh star men for Tuesday’s match against Arsenal.

Barca were not at their best on Saturday as they took the lead against Las Palmas in the sixth minute only for Willian Jose to equalise for the home side four minutes later. Barca retook the lead in the 39th minute through Neymar, and held on for the three points, even though they managed only 12 shots to their hosts’ 16.

With title rivals Atletico Madrid and Real Madrid both managing only draws at the weekend and therefore dropping points, Barca extended their lead at the top of the Spanish table to eight points.

The likes of Gerard Pique and Ivan Rakitic were rested for Saturday’s fixture, and will step back into the starting XI against Arsenal, while Sergio Busquets—who was also absent against Las Palmas—will also likely return to the heart of the midfield.

Claudio Bravo started against Las Palmas, but Andre Ter Stegen should replace him on Tuesday. Dani Alves and Jordi Alba will return to the full-back positions, while Javier Mascherano will retain his spot alongside Pique.

Andres Iniesta will hold onto his spot in midfield, while the aforementioned Rakitic and Busquets will replace Sergi Roberto and Arda Turan.

In attack, unfortunately for Arsenal, Barca’s celebrated attacking three of Lionel Messi, Luis Suarez and Neymar will likely be starting, which doesn’t bode well for Per Mertesacker and Laurent Koscielny.