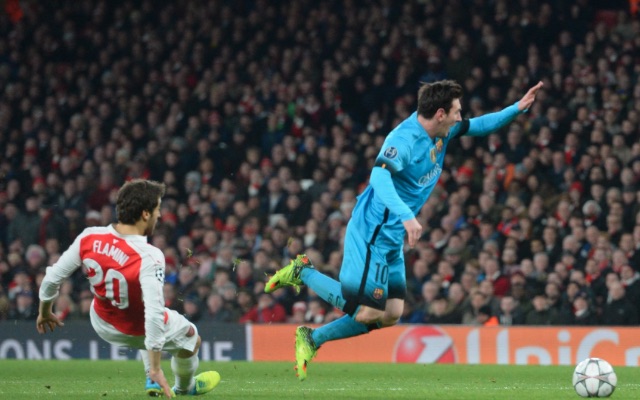 Mathieu Flamini’s cameo against Barcelona tonight will go down in Arsenal history…and not for the right reasons. But he does not deserve this.

The French midfielder conceded a penalty within 45 seconds of his late introduction in Arsenal’s 2-0 first-leg defeat in the Champions League.

His rash judgement in taking down Lionel Messi has left the Gunners with a huge mountain to climb in next month’s second leg at the Camp Nou.

But rather than accept defeat to a Messi-inspired Barca – the Argentine scored both goals at the Emirates – Gooners vented their anger at Flamini.

The 31-year-old, already occasionally a figure of ridicule at Arsenal, was subjected to some truly horrible Twitter taunts from his own fans.

Here is a selection of some of the harshest abuse. We’ve thrown a few funny tweets in there too just to lighten the mood. You decide which is which…

Flamini is a cancer is Arsenal, terminating his contract is the cure!

Gave a good account of ourselves tonight. Undone by a good counter and a fucktard Flamini. Great effort and Wellbeck was class off bench

I want to fly to London right now, hunt down Flamini and slap him in the face! This better be his last game as an Arsenal player. — Champ (@ChampChong) February 23, 2016

PUT A RESTRAINING ORDER ON FLAMINI IMMEDIATELY. HE CANNOT PLAY FOR MY CLUB. @Arsenal

Flamini flame is our side wiv unacceptable penalty!revenge dat goal @camp on else will throw ur ass out of d club — Ayounce (@Pharouk2013) February 23, 2016

If my son ever asks why I went to jail,

“KID, IT ALL STARTED WHEN FLAMINI GAVE AWAY THE PENALTY AGAINST BARCA ” — Ozilicious (@Goonerboy_49) February 23, 2016

That is the most flamini thing i have ever seen #COYG