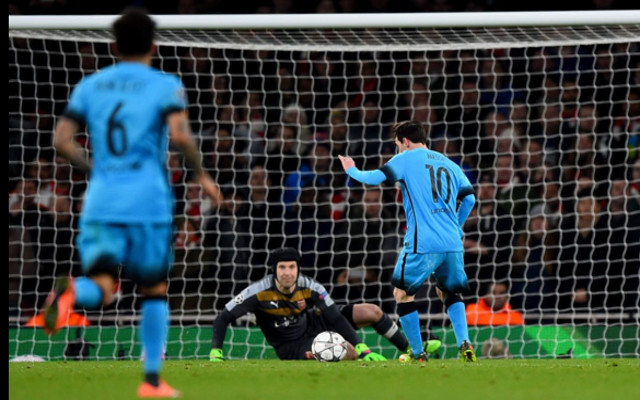 Lionel Messi can score on anyone in the world, but he never scored against Arsenal goalkeeper Petr Cech in six prior meetings – until today.

With Arsenal and Barcelona tied at 0-0 heading into the 70′ mark, there were considerable worries on the Barca bench that they might be held scoreless by the Premier League side. That all changed when Neymar and Messi finally found an opening, allowing them to charge past the Arsenal defenders, where Neymar drew the Gunners away and passed it to the isolated Messi – allowing him to put a goal past Petr Cech for the first time in his career.

Messi would make it two goals as he drew a penalty from Flamini later in the game to double the Barcelona lead.

Prior to the match, Messi had six goals in his previous three matches against Arsenal. By the end of today, he’ll have eight in his last four.