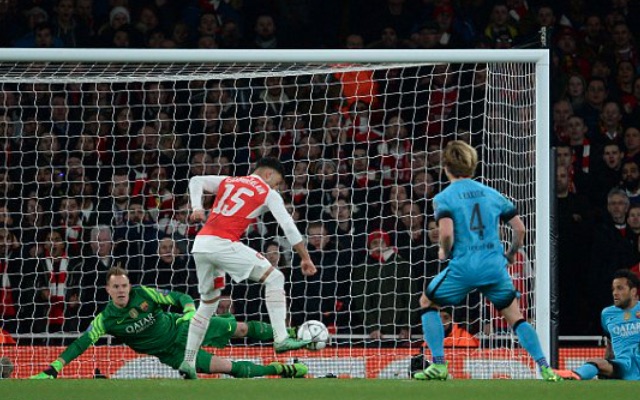 It was the type of chance that you can’t afford to miss against Barcelona. Alex Oxlade-Chamberlain did.

The Arsenal midfielder was given a starting role in tonight’s crucial Champions League tie, but fluffed his lines by squandering the best opening of the first 45 minutes at the Emirates Stadium.

Marc-Andre ter Stegen was floored after saving Hector Bellerin’s 22nd-minute shot. All the Ox needed to do was lift the ball over him, but his tame shot rolled straight into the goalkeeper’s chest.

The 22-year-old winger was preferred to Theo Walcott and Danny Welbeck because of his industry, but we daresay that either of his fellow England internationals would have buried that opportunity.

Oxlade-Chamberlain stuck to his defensive side of the bargain. He remained disciplined and tracked back to ensure that Bellerin was not overwhelmed by the combination of Neymar and Jordi Alba.

But, when he was let off the leash, he failed to convert a simple chance that would have given the Gunners a half-time lead over the European champions, as they held their own before the break.