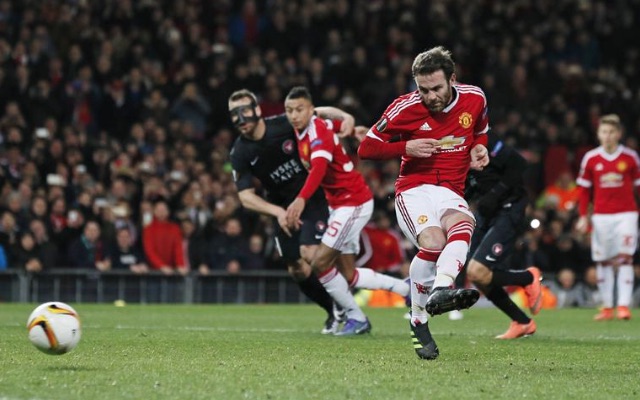 When it rains it pours, and it is currently bucketing it down on Louis van Gaal at Manchester United.

Without as many as 11 full internationals for the second leg of their Europa League game with FC Midtjylland, the Dutchman needs to be able to rely on the senior players still available to him.

But Juan Mata let him down with a first-half penalty miss which leaves the Red Devils on the brink of an elimination, which would likely see the pressure on Van Gaal’s position reach new heights.

Ander Herrera was felled just inside the box and Mata took on spot-kick responsibility in the absence of Wayne Rooney – one of a number of United players forced to sit out of the tie with injury.

It isn’t an awful effort from the Spaniard, and credit must go to Midtjylland keeper Mikkel Anderson for flinging himself to claw the ball away from the bottom corner, but it is tame and lacking power.

Mata converting from 12 yards would have brought United level at 3-3 on aggregate, after Pione Sisto silenced Old Trafford with a fine 27th-minute opener before Nikolay Bodurov’s own goal.