An early penalty from James Milner secured Liverpool a 1-0 win at Anfield tonight and a narrow aggregate victory over Augsburg in the Europa League.

Our friends at Empire of the Kop have rated how the Reds performed as they booked their passage into the last 16 of the competition on a nervy night on Merseyside.

No saves of note in the first-half, but intervened excellently in the second – rushing out to clear with an Augsburg striker through on goal.

Got into promising positions down the right, but his end product was lacking at the time. Flashed two shots across goal early on, but stayed in his own half for most of the second. A typical Clyne performance, in truth.

Energetic, but too often out of position. The story of Moreno’s season in many ways. The Spaniard’s crosses in the final third didn’t find their targets, but he’ll keep his place for Wembley.

Sakho’s best game in central defence for some time. The Frenchman’s been largely poor since returning from his hamstring injury, but showed all his best traits tonight. Unbeatable in the air and clever on the ball. Great timing ahead of Sunday.

Playing at centre-back ahead of Kolo Toure, Lucas laid a back-pass straight into the path of an onrushing Augsburg attacker which could well play himself out of Sunday’s final against Manchester City. He did improve after his error, however.

Some nice touches in the middle from Can, who often switched us between flanks with crisp passes to feet. Also used his strength to good effect, putting in a better performance than we’ve seen in recent weeks, although fans will still criticise the odd mistake.

Suffered a bad tackle in the first-half but thankfully got up when a stretcher was on standby. The captain hassled the opponents but lacked quality in the final third, missing a sitter which would have put the game to bed.

Dispatched his penalty with aplomb, and provided customary midfield legwork throughout. Milner also showed class on some occasions, playing one-twos and picking sensible passes, choosing when to hold the ball and when to pass as well. 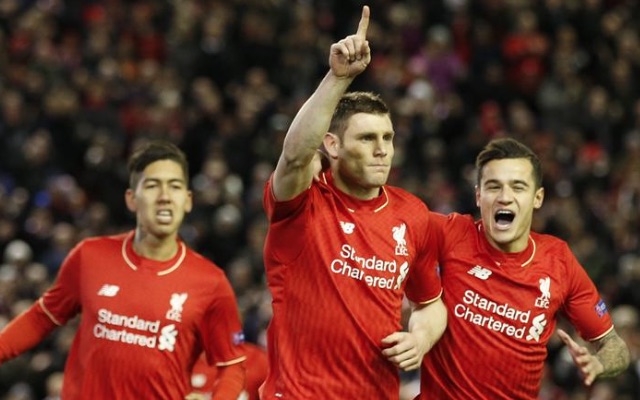 Found himself on the flank more often than he did centrally, but was happy to rotate with Firmino especially. Held the ball up brilliantly and created a wonderful chance for Coutinho in the first-half. He missed a guilt-edged opportunity in  the second when his right-foot shot went narrowly wide, but crucially – left the field healthy. We’re a totally different attacking outfit when he’s on the field.

Showed so much class on the ball, cutting in from the left and linking up with the rest of the front-three. His feet were incredibly tidy all night, and he managed to forge himself shooting opportunities seemingly at will. Played some breathtaking passes and his linkup play with Sturridge was excellent.

Found space galore in the final third, proving again that his movement is maybe his best quality. His passes were sometimes off though, which were met with groans from the crowd, although he did lay the ball on a plate for Henderson who should have scored.

Divock Origi – 7/10 – Stretched the game when he came on for Sturridge. A really good impact sub.