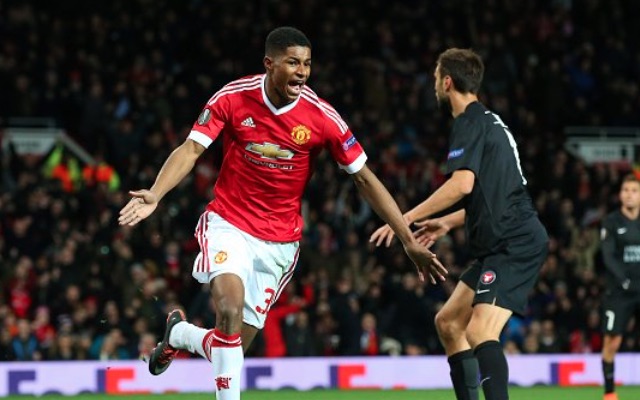 If you had not heard of Marcus Rashford before tonight, you are not alone.

But the 18-year-old is the name on everybody’s lips now after scoring twice to help retrieve Manchester United from a potentially disastrous Europa League exit at the hands of FC Midtjylland.

Thrust into a senior debut after Anthony Martial pulled up in the warm-up at Old Trafford, Rashford bagged United’s second and third in a 5-1 victory which sends them through to the last 16.

The teenage striker showed great awareness to pop up at the back post for his maiden Red Devils goal, and then produced an excellent first-time finish from Juan Mata’s cutback to quickly double his tally.

Mata had previously missed a penalty as United entered the break trailing 3-2 on aggregate. Pione Sisto silenced the home crowd on 27 minutes before Nikolay Bodurov’s own goal made it 1-1 on the night.

Then Manchester-born Rashford, who has only been a part of United’s youth setup since 2014, came to the rescue, and late strikes from Ander Herrera and Memphis Depay made it a comfortable conclusion.