Liverpool entertain Augsburg on Thursday in the second leg of their Europa League last-32 tie, with the scores still deadlocked at 0-0 from last week’s reverse fixture.

Reds manager Jurgen Klopp faces a tricky selection dilemma with their European campaign at stake, and Sunday’s Capital One Cup final against Manchester City on the horizon.

Will Klopp go with his strongest lineup at Anfield, or rest key players for their trophy hunt at Wembley? Here, CaughtOffside predicts the Liverpool starting XI…

The Belgian is playing all of Liverpool’s games across all competitions at the moment.

Clyne is one of the fittest players in the Liverpool squad and can handle two big games in four days.

Toure is fighting for his Liverpool career and this week is a big opportunity for him to prove a point to Klopp, with senior centre-backs Dejan Lovren and Martin Skrtel still on the sidelines.

Klopp may, ideally, have wanted to rest the Frenchman ahead of this weekend’s Wembley showdown with Sergio Aguero, but does not seem to trust Steven Caulker enough to grant Sakho that luxury.

Injuries mean that Moreno has no real competition at left-back at present, and so he is a likely starter.

An away goal for Augsburg would make it a real uphill struggle for the Reds, and so the Brazilian might get the nod to tighten up the midfield. Captain Jordan Henderson may be granted a rest.

The selection of Lucas will allow the German international more freedom to join in attacks. He was a goalscorer against Augsburg in his Bayer Leverkusen days and will hope to be so again.

Milner will take the armband in the absence of Henderson. The veteran Englishman needs to take on some creative responsibility alongside his hard work, if Klopp rests influential attackers.

Some expected the young winger to start in Germany last week, but he only featured off the bench. Holding back the in-form Roberto Firmino for Wembley could give Ibe his chance at Anfield.

Klopp may want the insurance of having Coutinho in his side if other star names are given breathers. Adam Lallana would be the perfect alternative but missed the first leg with a muscle problem.

Continued his recovery from injury with an hour for the reserves on Sunday. That outing may have been with a start against Augsburg in mind as Klopp takes no chances with Daniel Sturridge. 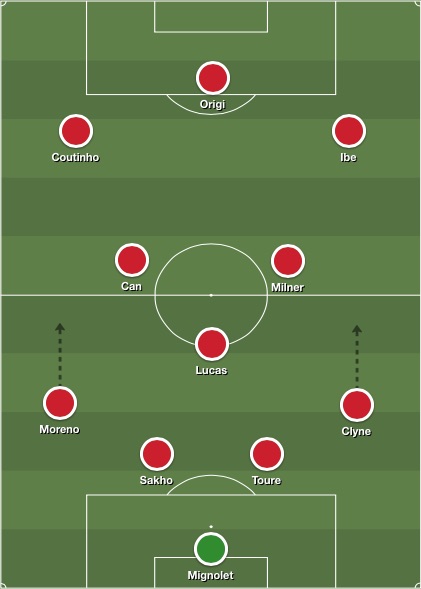