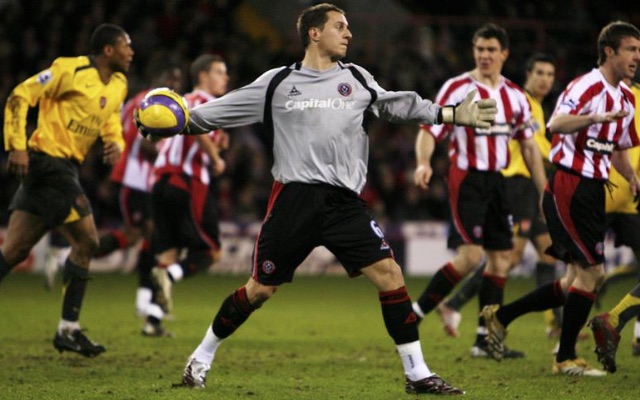 Arsene Wenger is pretty well endowed in the goalkeeper stakes. In Petr Cech, Arsenal arguably have one of the best stoppers of all time, while David Ospina – a 62-time international for Colombia – is a pretty good no.2!

But, what would Wenger do if Cech got injured or sent off after he had made his three substitutes in a match?

Stick Per Mertesacker in goal, purely based on his massiveness? Or give Alex Oxlade-Chamberlain the gloves, because he proved on Tuesday night that he loves rolling around?

It’s awful when ‘dirty foreigners’ roll SIX times after being tackled. An Englishman wouldn’t do that. Oh… #ARSFCB pic.twitter.com/VC7GWHTrwX

Nope, apparently, Wenger would think about calling on French striker Olivier Giroud to replace Cech in such a scary scenario.

He was quoted by Arsenal’s official website as saying: “Who would go in goal if we got a goalkeeper sent off? That would give me a big problem, because I haven’t thought about it. Usually it’s the central defenders or the strikers.

“I had George Weah at Monaco and he was a fantastic goalkeeper in training. Maybe a guy who has played basketball in his youth would be good, he would be used to using his hands.

“In our team I don’t know what I would do, it was more of a problem before when you didn’t have a substitute goalkeeper. It can still happen late in a game though. I would have to make an instinctive decision, maybe it would be Giroud.”

Giroud seems a rather odd choice. He’s a calm and confident individual who probably wouldn’t get too flustered by the daunting challenge.

However, he’s far from being one of Arsenal’s most agile players.

Saying that, Phil Jagielka (pictured above) – one of English football’s best ever outfield goalkeepers – judging by his 30-minute clean sheet for Sheffield United in a 1-0 win over Arsenal back in 2006 – is hardly Michael Flatley!