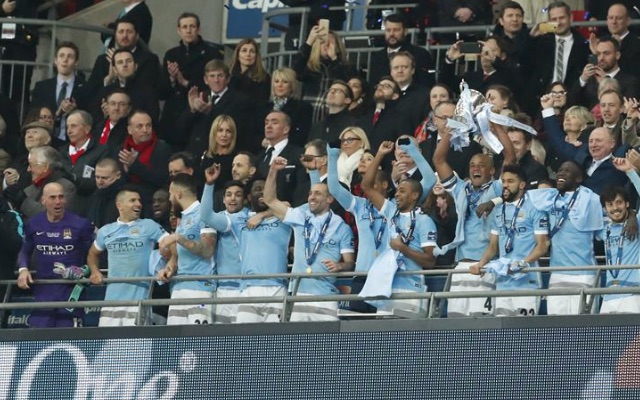 It was a dramatic day at Wembley as a Willy Caballero-inspired Manchester City pipped Liverpool to the first major trophy of the season with a penalty-shootout victory in the Capital One Cup final.

Our friends at Empire of the Kop will be licking their wounds tonight – but have stopped drowning their sorrows for long enough to put together the below match report & highlights package of the game.

Liverpool were denied a maiden trophy under Jurgen Klopp by a cruel penalty shootout defeat to Manchester City, after the Capital One Cup final ended 1-1 at Wembley this afternoon.

An error from Simon Mignolet gifted the Citizens a 49th-minute opener through Fernandinho, but the Reds goalkeeper made three great saves to force penalties, after Philippe Coutinho’s 83rd-minute equaliser.

Coutinho was one of three players – the others being Lucas Leiva and Adam Lallana – to have spot kicks saved by Willy Caballero, as we fell heartbreakingly short of a first trophy in four years.

Klopp sprung a surprise by sticking with Lucas at centre-back. Kolo Toure had been expected to come in to partner Mamadou Sakho, but the Brazilian was retained following the midweek win over Augsburg.

As it turned out – Toure was on the pitch after 25 minutes. Sakho clashed heads with Emre Can and seemed to suffer a concussion. He tried to play on, but a dazed stumble which allowed Sergio Aguero through on goal soon after sealed his fate with Klopp and the Liverpool medical staff.

Sakho was understandably very reluctant to surrender his place in the final. As imperative as it is to ensure player safety, you could not help but feel sorry for the French defender as he was ordered off the field. His frustration was there for everybody to see, including the cameras:

It could have been worse – Sakho’s wobble nearly cost us a goal. Aguero was through one-on-one with Mignolet, but the Belgian stopper made an excellent save to tip his shot onto the post.

Aguero might have been licking his lips at our centre-back pairing of Toure and Lucas, but we otherwise kept him at bay in the first half. Lucas was probably the best player on the park before the break.

At the other end, we could not forge any chances of our own. There was little sign of the Coutinho-Roberto Firmino link-up from our 4-1 win over City in the Premier League as blue shirts swamped either of the Brazilians whenever they got the ball. Daniel Sturridge was also starved of time and space.

It was not a high-quality game, but it was a proper cup final. Competitive, full of strong tackles and tense, like it could swing on one moment of Wembley magic, or one high-profile mistake.

It was a mistake, and unfortunately one from Mignolet. Aguero held the ball up and released Fernandinho on the overlap. His shot from a tight angle squeezed under the keeper when it really shouldn’t have.

Our response took a while in coming. City’s goalkeeper Caballero was seemingly a calamity waiting to happen and yet we did not register a shot on target until Coutinho’s 83rd-minute equaliser.

Instead our backs were against the wall. Raheem Sterling missed two gilt-edged chances from inside the box, including a sitter from all of six yards – one bitter consolation we can take from today.

What £49 million buys you these days https://t.co/qLxZRT3v14

Then came the moment which rocked Wembley. Sturridge put the ball across the six-yard box. Substitute Lallana poked against the woodwork at the back post, and Coutinho buried the rebound!

Extra time was in our sights after a difficult second half, but we needed Mignolet to get us there. He made a good reflex save to keep out Fernando and then bravely blocked at Yaya Toure’s feet.

And the goalkeeper had fully atoned for his error by the end of the first period of extra time, making an outstanding one-handed save to claw away an Aguero effort which was bound for the bottom corner.

It was then our turn to go close. Divock Origi nearly spared us the agony of penalties when his header from James Milner’s stand-up cross was palmed away by Caballero – a sign of things to come.

Can got us off to a perfect start in the shootout with a devilishly cheeky panenka, but Lucas, Coutinho and Lallana’s spot-kicks were all saved by Cabellero. Only Coutinho’s was a poor effort – the other two takers were blameless as City found themselves an unlikely hero in their stand-in stopper.

The way the second half had gone, it appeared as though Mignolet would be that man for us. But, after Fernandinho hit the post, Jesus Navas, Aguero and Toure all found the bottom corner from 12 yards.

Penalties is the hardest way to lose and an absolute lottery. We can be slightly disappointed with our performance across 120 minutes, but we cannot question the desire of the lads. Maybe next year.