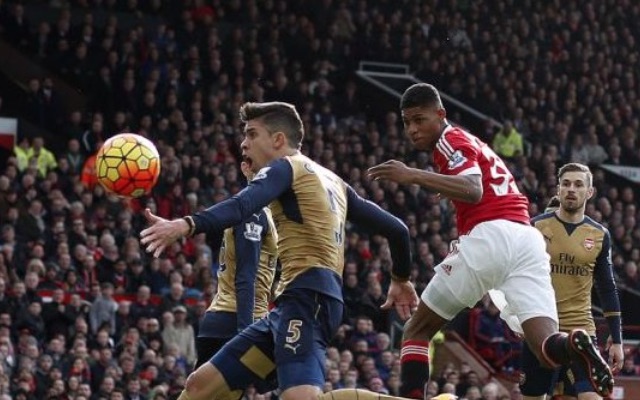 On Oscars night – Hollywood would do well to write a story more sensational than that of Marcus Rashford, whose Manchester United fairytale has continued with a first-half double against Arsenal.

The 18-year-old has landed a blow to Arsenal’s Premier League title hopes with two well-taken goals in the space of three minutes at Old Trafford – an instinctive first-time finish and a smart glancing header.

Rashford was thrust into a senior debut for the Red Devils against FC Midtjylland in midweek following Anthony Martial’s injury, and bagged a brace to rescue United’s Europa League campaign.

And the teenager has produced more unlikely heroics at the Theatre of Dreams this afternoon – an appropriate name for the location of Rashford’s remarkable tale if ever there was one.

Just like he did on Thursday, Rashford showed great striker’s instincts to sweep home a loose ball for his first goal, and then took up an excellent position between Arsenal’s defenders for his second.

Former United striker Danny Welbeck has since pulled a goal back to reduce Arsenal’s deficit to 2-1 at half time, but Rashford will be making the headlines regardless of what happens after the break.