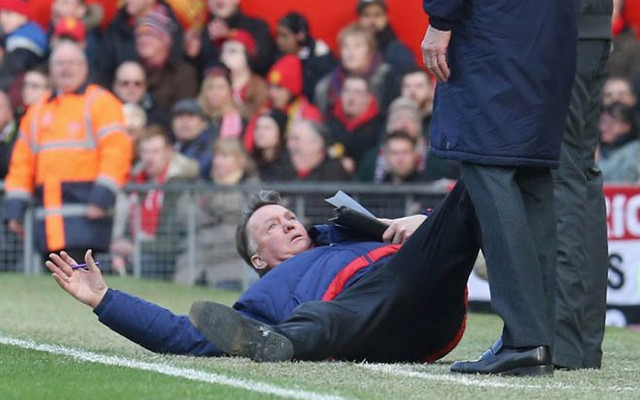 And the Academy Award for Best Sideline Animation goes to… Louis van Gaal for Manchester United.

The 64-year-old manager of Manchester United did not take kindly to seeing Arsenal striker Alexis Sanchez take a dive during his side’s 3-2 win over the visiting Gunners. While complaining to a sideline official, Louis van Gaal decided to take his touchline animation to a new level by falling flat on his back to try and imitate Sanchez – much to the delight of the fans at Old Trafford and the chagrin of Arsenal manager Arsene Wenger.

The win was a major victory for Van Gaal, who has the Red Devils on  a three-game winning streak for the first time in months. They defeated Shrewsbury Town 3-0 in the FA Cup on Monday, then crushed FC Midtjylland 5-1 on Thursday in the second leg of the Europa League Round of 32 to advance in the tournament.

If nothing else, he’ll probably get a few calls from Life Alert to star in one of their commercials after he leaves Man United. He sold that fall superbly.