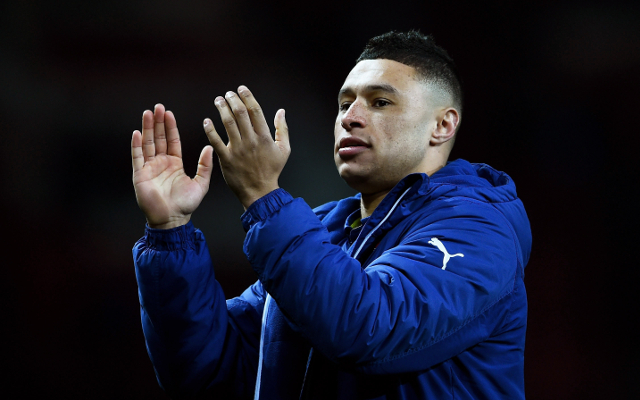 Arsenal manager Arsene Wenger has confirmed that Alex Oxlade-Chamberlain will be out injured for up to eight weeks with a knee problem.

The 22-year-old suffered the issue during last week’s defeat to Barcelona in the Champions League, as he clattered into Javier Mascherano having lost control of the ball.

Although he attempted to continue playing, he was later substituted with Wenger left frustrated by the challenge which could force the youngster to miss another international tournament.

Further scans and tests have revealed that the extent of the damage is serious although no surgery will be required.

“Six to eight weeks. No surgery,” Wenger said at his press conference on Tuesday, according to ESPN FC.

“We feared surgery at some stage when we saw the MRI, but in the end we got positive news on that front. But the next six to eight weeks, that means he’ll be out until March, April.”

Meanwhile, the French tactician added that his squad hadn’t suffered any further setbacks following the defeat to Manchester United on Sunday, and expects everyone to be available for the midweek clash with Swansea City.

It is a pivotal time for the Gunners having now gone without a win in their last three games in all competitions, while they continue to slip off the pace in the Premier League behind both Leicester City and Tottenham.

With a potentially decisive trip to White Hart Lane ahead this weekend, Wenger will be desperate to get back to winning ways against the Swans in order to rebuild some of the damage done to their confidence after appearing as though they were primed for a real run at the league title.