Manchester United are on the cusp of becoming the first team to score 1,000 home goals in the Premier League as they prepare to host Watford.

The Red Devils took their tally to 998 in 456 games at Old Trafford with Sunday’s 3-2 win over Arsenal, and could reach the landmark this evening.

The Theatre of Dreams has not witnessed the volume of goals that it is accustomed to this season – United have only managed 18 in 13 home games.

They have also failed to score in five games on their own patch, but have discovered their scoring touch with eight goals in their last two home outings.

Wayne Rooney is responsible for 99 of United’s 998 home Premier League goals – more than any other player with Paul Scholes second with 59 strikes.

But Louis van Gaal’s captain is highly unlikely to be the man to score the milestone goal because he is out for at least another month with a knee injury.

Perhaps the honour will fall to new hero Marcus Rashford, who has bagged four goals in his two home United games, including his brace against Arsenal.

The Gunners are closest to United’s total, with 911 goals shared across Highbury and the Emirates Stadium. Here is Sky Sports’ graphic of the Premier League’s top home scorers. 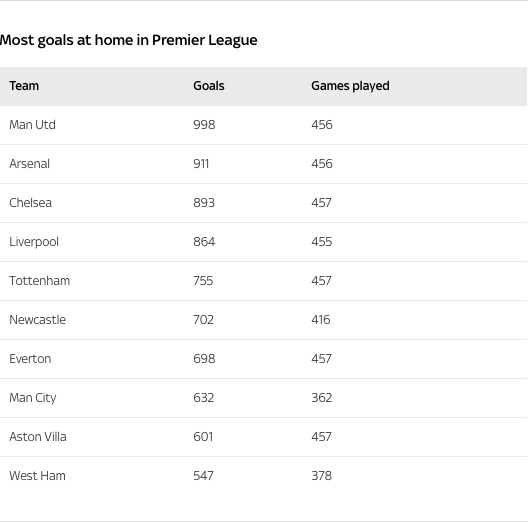