Tottenham Hotspur’s Premier League title bandwagon rolls on to Upton Park on Wednesday, for a tricky trip to West Ham United in the first of a huge London derby double header.

Spurs came from behind to beat Swansea City on Sunday, consolidating second in the table while rivals Arsenal, whom they host at the weekend, were losing to Manchester United.

Tottenham’s visit to the Boleyn Ground – their last one before West Ham move to the Olympic Stadium – is a third game in six days for Mauricio Pochettino’s young and fit squad.

But will the Argentine consider resting players ahead of the massive North London showdown at White Hart Lane? Here, CaughtOffside predicts Tottenham’s lineup vs the Hammers…

Showed his importance to Spurs with two world-class saves in their comeback win over the Swans.

This would be his 16th start of the season, but only fifth in the Premier League. All of those top-flight nods have come since Christmas – a sign of Pochettino’s growing confidence in him.

The Belgian, a scorer as Tottenham thrashed West Ham in November’s reverse fixture, has been outstanding all season. Imagine him playing next to Ledley King. Go on, I dare you. Unbeatable!

That said, Alderweireld’s partnership with Jan Vertonghen was excellent, and his one with Wimmer is proving pretty good too. Four league wins out of four games, and only two goals conceded.

The left-back duties have been more evenly split than the right-back ones at White Hart Lane, but Danny Rose has thrown down the gauntlet with his excellent recent form. How will Davies respond?

The tough-tackling midfield convert is exactly the type of player that you would want on your side in a competitive London derby. Has a tough job on his hands nullifying Dimitri Payet, though.

Pochettino confirmed to Tottenham’s Twitter account that Carroll is back, but Mousa Dembele remains out. Carroll currently has the nod over Nabil Bentaleb, and Ryan Mason may be needed elsewhere.

The Argentine has started Tottenham’s last two matches, but has been substituted before the 76th minute in both of them, so should be fresh enough to send an out-of-sorts Son Heung-Min to the bench.

Pochettino also revealed to Tottenham’s Twitter account that Dele Alli is being monitored after some “problems” against Swansea. He probably won’t be risked with the Arsenal clash in mind. Mason offers a similar brand of midfield industry and attacking input, so could be pushed further forward.

The Belgian has scored six goals in his last nine games, and none more important than his equaliser against Swansea. Deserves a start, and Christian Eriksen can have a breather ahead of the NLD.

Wore a protective mask on Sunday after breaking his nose. That injury won’t keep him out against the Hammers – who felt Kane’s full force courtesy of his double at White Hart Lane earlier this term. 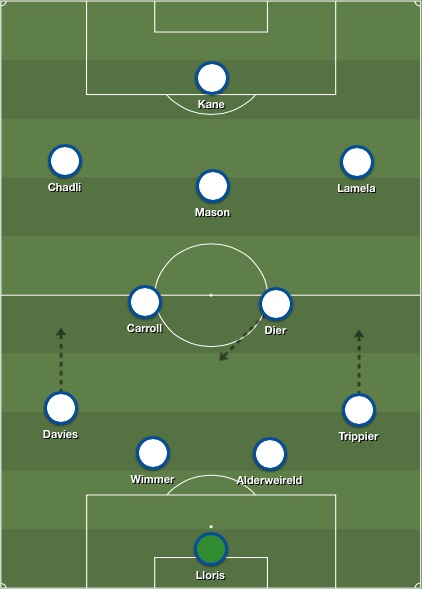