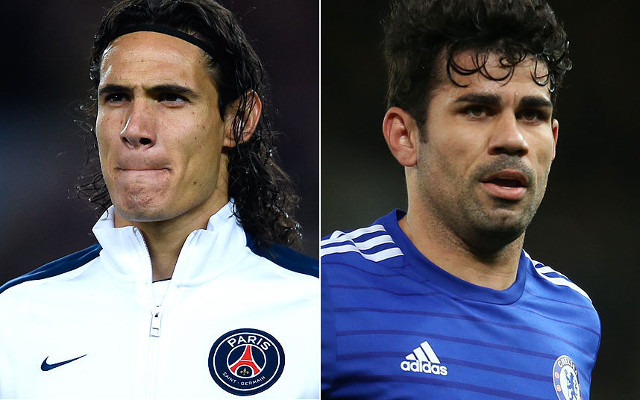 Chelsea and Paris Saint-Germain got to know each other very well when they played each other in the Champions League last month. Among the things the two clubs have in common are some very hard-to-please strikers – for Chelsea it’s Diego Costa and for PSG it’s Edinson Cavani. Once the season is over though, the two scoring machines may find themselves swapping jerseys as more than just a gesture of friendship.

According to the Metro, Chelsea and PSG are discussing a player swap between Costa and Cavani during the summer transfer window.

Though Diego Costa has returned to his regular top-notch goal-scoring form since Guus Hiddink took over, there’s a growing belief that he wants to force a move out of Stamford Bridge.

Cavani – rated by the Metro at £40 million – has reportedly been unhappy with PSG for a variety of reasons, not the least of which are his being played out of position and second-fiddle to Zlatan Ibrahimovic. He has 12 goals and two assists in Ligue 1 this season.