Tottenham Hotspur missed the chance to go top of the Premier League table for the second time in a week as they drew 2-2 at home to 10-man Arsenal in the North London derby.

Mauricio Pochettino’s side had turned it around two minutes later, with Harry Kane scoring an outstanding goal for his fourth in three league games against Arsenal.

But the Lilywhites surrendered their advantage as Alexis Sanchez earned the Gunners a crucial point which keeps them within three of Tottenham towards the top of the table.

Beaten a bit softly for the Sanchez goal. Made a good save from the Chilean’s free-kick late on.

Had a couple of brainless moments in defence, but was a threat when he ventured forward.

Not his best defensive display, but took his goal brilliantly on the half-volley with his weaker foot.

Caught out of position for Sanchez’s equaliser, but made amends with a match-saving tackle on Ramsey in stoppage time. Who knows how crucial that intervention could be come the end of the season.

Tottenham’s most dangerous attacker in the first half as he had acres of space down the left, but his deliveries were pretty poor. Some of his teammates were a bit flat, but Rose was a bundle of energy.

Had a solid first half but was too often dragged out of position in the second, exposing his defence, and was very lucky to stay on the pitch when his tug of Olivier Giroud’s shirt went unpunished.

Tottenham’s best performer. The only Spurs player to show consistent quality on the ball – rarely giving it away in the heat of the midfield battle. Didn’t lose a 50-50 either before his late withdrawal. 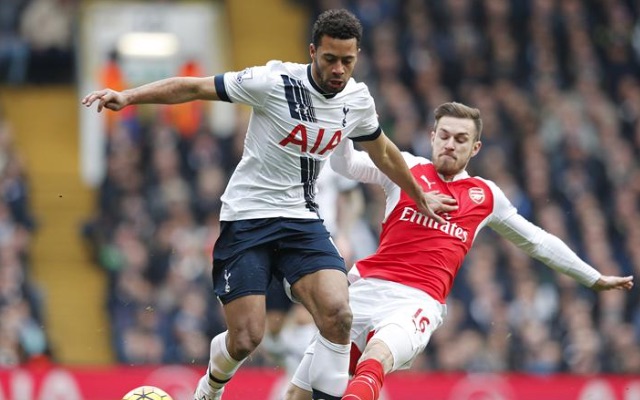 His set-piece deliveries were very hit and miss, but Eriksen covered a lot of ground and tested Ospina with a couple of long-range efforts. Did not have the quality today when it really mattered.

Not as influential as he has been previously, but his chase of what looked to be a lost cause – and the very smart back-heel that followed – provided Kane with the chance to bring WHL to its feet.

Ran around like a headless chicken, but that was his downfall – an early yellow card meant that he was walking a tightrope for the rest of the game. Showed little quality on the ball, either.

Scored his fourth goal in three league games against Arsenal with an unbelievable curling effort beyond David Ospina. Spurs looked poised to win from there, but Sanchez cancelled out Kane’s stunner.

Replaced Lamela to help Spurs gain control of the midfield, but they actually lost control.

Replaced Danny Rose for the final 10 minutes. Nothing to report here.

Could not have an impact coming on for Dembele with eight minutes to go.